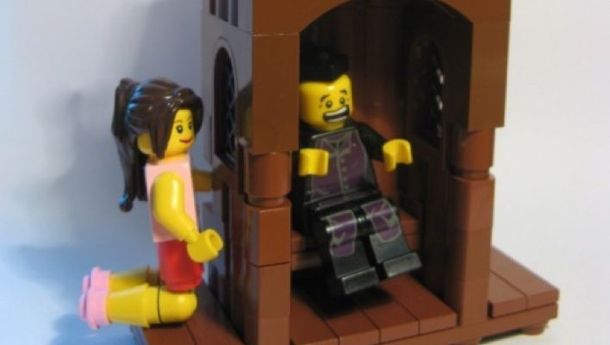 Not the personal kind of confession but the sacramental kind.

Well, hate is a strong word in relation to a sacrament. Let’s just say I’m in a slump and I have a hard time going to confession.

I’ve read what all the Saints say about confession, and I know I’m supposed to love it. I know how important and freeing it is. I’m just not feeling it lately.

Not for a while actually.

My return confessions: the salad days

When I first came back to the Church I had a different relationship with confession.

Even though I had much more to confess, it was simpler. After 20 years away from the Church, I had quite a laundry list of things to tell. I pretty much exhausted the examination of conscience and even went beyond it a few times.

I’ve never heard a harsh word from a priest in confession, but I’ve certainly gotten a few raised eyebrows and one double-take.

After that initial run on clearing out the sin closet, things got difficult.

I turned myself around and committed to living a Christian life. After a year or so, I no longer found my sins on the “biggie list” you get with a standard examination of conscience.

Had I stopped sinning? Hardly. I still felt very sinful. I just had to dig deeper to put words to my sins. They were mostly venial sins and faults. And, they were the same ones over and over again.

It’s interesting how you can get confession burnout from boredom. I know it’s not just me because lots of others talk about this. Does confession lose it’s appeal if you don’t have anything juicy to confess?

How ironic…interest in the sacrament that rids you of your sins thrives on a sinful life.

Confession as the Second Baptism

In the strictest sense, you’re only obliged to confess mortal sins.

Confession is the sacrament that restores the broken relationship with God. The Church Fathers called confession the “Second Baptism.” The first Baptism was by water, the second by tears of repentance.

This is why most examinations of conscience you find reference the Ten Commandments–these being the minimum requirement of right relationship with God. The Sacrament of Confession is still beneficial even after you’ve restored that relationship, however. It gives grace that’s targeted directly to the sins you’re confessing, so it helps you avoid them in the future.

Still, I do go to confession

Even though I dislike it, I still go to confession.

There’s lots of things I hate that I still do for my health. I go to the dentist every 6 months (do hate that). I go to the doctor for a physical ever year (really hate that…and sometimes I skip a year). My wife does mammograms and PAP tests (have to say, those don’t sound pleasant).

And, I go to confession every month or so. It’s not that it’s terribly unpleasant (not as bad as the doctor), but I would just rather do other things than bare my secret inadequacies and faults to another person…like go shopping.

But I have to admit, most of the time, after I go I’m glad I went. It does give me a good feeling…all fuzzy and warm inside. Also, it feels very good to know I’m forgiven. Even though I sometimes don’t feel forgiven or think I should be, I can be sure the sacrament worked. That’s nice. The good feeling is not the primary reason to go, of course. It’s a nice side benefit, though.

Perhaps someday, when I’m more fully converted, I’ll feel differently about this sacrament. I’ll rejoice in my weakness and celebrate that personal mini-redemption I receive every time I walk in the confessional. It’s the merits of the Cross poured out just for me, cleansing my  soul through the ministry of the priest. That is powerful.

It’s something to look forward to. But for now…I just go.

So, you’ll have to excuse me. I have a confession to make.

This post originally appeared on my personal blog. Find more stuff there about catechesis, evangelization, and the awesomeness that comes from the intersection of the two.