This is some refinement I’ll be working into my Genesis chapters 1 and 2 classes this Fall.

When we cover the 6 Days of Creation I incrementally draw this graph on the whiteboard: 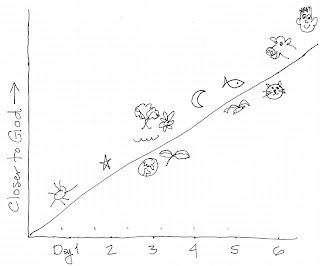 It’s how I show that as Creation progresses, the things created are more like God. Once this graph is done, we move on to Eve, marriage, and God’s command to be fruitful and multiply. That completes our look at Chapters 1 and 2. We then look at sin in chapter 3. But this year, I’m going to draw a bit more to make a bridge between the bliss of Chapter 2 and the Fall in Chapter 3.

I usually stop the graph at Adam as shown. But this year, when God makes Eve, I’ll erase Adam’s head, and draw both Adam and Eve standing next to each other with some space between them. Then when we get to God’s commandment to be fruitful and multiply, I’ll draw in some kids, and the top of the graph will look like this: 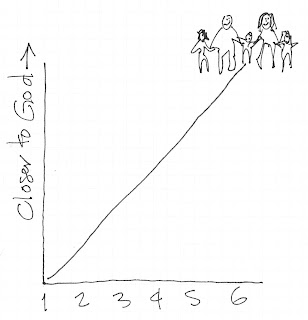 [In class I’ll still have the animals & stuff on the slope.]

Then I envision this sort of discussion: 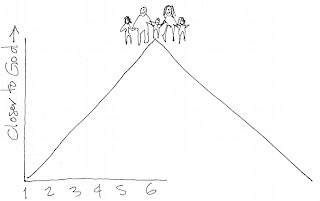 They’re on a mountain! Yes, and how do they see all the other plants and animals? They look down. Yes. And how might that make them feel? Umm…important? Yes, and….like they are the boss? Yes, and…they can do what they want. Yes, maybe so. But what if they look up? They see God. Yes, and how do they feel then? Like God is important. Yes. Now if you see the Moon from the ground, but later you see it from the top of a mountain, are you closer to the Moon while you’re on the mountain? Yes. Does the Moon look any bigger? I don’t think so. Right; only a tiny, tiny bit that makes no difference. You may as well be at the bottom. But tell me about when you look down from the mountain. You see everything! Yes, it makes a big difference when you look down. Now tell me about looking up to someone. Like my parents? Yes. Well? They take care of us. Yes. And how about looking down on someone, y’all ever done that? Nobody? Well I have, and it’s probably my worst habit. That reminds me, let’s jump ahead to one of Jesus’ parables. See if y’all can tell it.

So are you most likely to feel humble- or proud- when you look down on someone? Proud. Yes, and if you look up to someone? Humble. Yes, good.

Now we’re about to start on Chapter 3 in Genesis, the business with the snake. Y’all be ready to explain what pride and humility have to do with Adam and Eve’s sin, and our sins, too— there’s more to it than just eating an apple.”

3. Drawings can be more than illustrations: they should also be teaching tools.