My parish included this mosaic in this year’s Corpus Christi missalette: 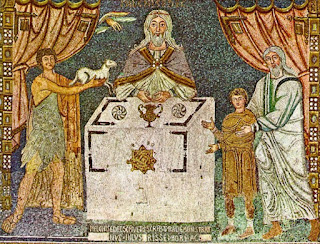 It’s located in St. Apollinare in Classe, Italy. Classe is near Ravenna, which has some spectacular mosaics, including these two which I already use in Catechism class to discuss Abel, Abraham and Melchizedek as they show up in Genesis: 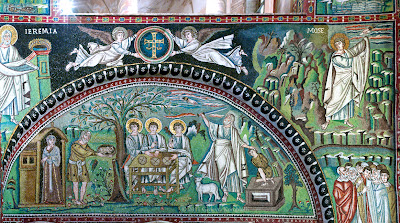 Anyway, per this older post I use these two mosaics in September to lay the groundwork for April’s discussion of this line from the Mass:

“Be pleased to look upon these offerings with a serene and kindly countenance, and to accept them, as once you were pleased to accept the gifts of your servant Abel the just, the sacrifice of Abraham, our father in faith, and the offering of your high priest Melchizedek, a holy sacrifice, a spotless victim.”

But next year I’ll use the St. Apollinare mosaic to discuss the Mass instead of using the two San Vitale mosaics twice in the same year. I’ll point out that the mosaic of all three men and their offerings together around a common altar directly illustrates that line in the Mass. It shows that early on, the liturgy was explicitly connecting their sacrifices to the sacrifice re-presented at Mass. Like a lot of things in Catechism class, I can always tell this to the kids. But when they can see it for themselves they learn better.

By the way, I checked online for the oldest extant text of a Mass, and found the Gelasian Sacramentary from about A.D. 750. It reads:

“…and accept, just as you deigned to accept the offering of your just servant Abel, and the sacrifice of our patriarch Abraham, and that which your highest priest Melchisedech offered you, a holy sacrifice, a unstained offering.” (thanks to Steve Perkins)