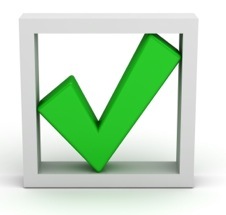 Confirmation should not be just a check in the box!

Middle school is the worst time to confirm kids.

They’re also trying to figure out their own place in the world and transitioning from blindly accepting the faith of their parents to understanding what they themselves truly believe.

Which often means they’re unsure of what they believe and their faith is shaky.

Confirmation: the carrot on the stick

Confirmation is the proverbial carrot on the religious education stick that draws kids and parents through the system. It seems Catholic parents are hardwired for one thing when it comes to their child’s spiritual upbringing–get the sacraments!

For a long time I’ve fought against this. Merely getting the sacraments is not a real goal. The goal should be conversion and spiritual transformation. Confirmation is a vehicle for that…not an end in itself.

Despite that, in Catholic culture today, Confirmation is a kind of like sacramental graduation. Once you’ve got it there’s no need for any more instruction in the Faith. You can go on about the rest of your life.

Restored order and the reduction of carrot inventories

Recently, I was participating in a Facebook forum about Confirmation when the topic turned to restored order and the age of Confirmation.

Restored order refers to giving kids Confirmation before their First Communion. This is actually the correct sequence for receiving the Sacraments of Initiation–Baptism, Confirmation, and Eucharist. That’s the way it’s done for adults at the Easter Vigil. It’s the way it’s always been done.

Confirmation is tied to Baptism. It’s a completion and increase of baptismal graces. The Eucharist is really the pinnacle of Christian initiation so it should be received last. It is the summit of the sacramental life, and union with God is the goal of Christianity…what everything tends toward.

So, there’s been a push in many dioceses to “restore” the order of Confirmation to what it, theologically, should be. The byproduct, of course, is that Confirmation would happen a lot earlier because the norm for celebrating First Communion is 2nd grade. No more carrots.

I’ve always been in favor of the restored order and younger ages for Confirmation.

The primary benefit is that children receive the graces of Confirmation much earlier. The hope is, if they have those graces working for them longer, they’ll be better prepared for their teenage years and won’t fall away.

In the midst of the Confirmation discussion, Sherry Weddell brought this up:

Sherry Weddell — On top of the theological issues, there is the real life burning issue which I’ve already had “confirmed” by local leaders. One of the consequences of our failure to evangelize our own is that children who are confirmed earlier, leave earlier. If we confirm them at 12 or 8, they are gone at 12 or 8. if we confirm them as infants, they will hang around only long enough to receive first communion and then they will be gone. The sad thing is: the earlier we give the the sacraments, the less chance we have to do any meaningful childhood catechesis. The rise of wide-spread infant confirmation will mean, at a practical level, the collapse of the entire child-oriented CCD/religious ed system. Which will leave us only one alternative: ad gentes-style, missionary evangelization of adults.

I had never considered these possibilities:

It’s an interesting question to ask, if we have wide-spread restored order and kids get confirmed by 3rd grade, will that signal the collapse of significant childhood catechesis? Sherry seems to have evidence that this is happening in restored order dioceses.

I’m the last one to advocate for the carrot on the stick approach to Confirmation. I don’t like the implications.

However, with the culture the way it is, it might be the only option to keep the majority of kids in religious education.

Until things change that is. The challenge we have is to actively evangelize parents and children to reverse this trend. We need to change parent’s check in the box attitude toward their children’s faith development.

We need to convert our children while they’re young. We need to teach them that sacraments are transformative and give power to live well. They’re not just something you get because the time is right and they’re not graduation.

What do you think? Given these circumstances, is restored order a bad thing? Could it collapse the current religious education system? I’d love to hear your thoughts in the comments.

This post originally appeared on my personal blog. Check me out there to learn about evangelizing catechesis, the awesomeness that comes from the intersection of evangelization and catechesis.