Partial whiteboard from April 17, the second of three classes on the Mass: 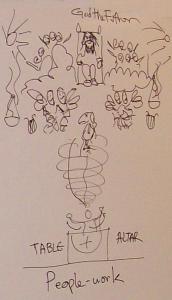 Bits I read (not all at once!) while I draw and we discuss the continuity between the worship in Heaven and on Earth:

This was about 1/3 of the whole board, so figure 20 minutes of classtime on this developing image while talking about Mass, the Heavenly Worship, incense, harps, singing, elders-presbyters-priests, the Paschal Lamb, the Last Supper, the Crucifixion, the Holy Holy Holy, the 4 Evangelists and their attributes (Angel, Lion, Bull and Eagle); reading relevant bits of Eucharistic Prayer #1 from the Missalette; and of course, the Holy Tornado.  I draw something like this every year, but the content and execution varies with my interaction with the kids. I’m posting this to emphasize how drawing can organize information in a way that’s easy to refer to as the discussion proceeds, and much more effectively than just writing words on the board. When it’s done, it’s an ensemble of concepts; not merely a list of them.