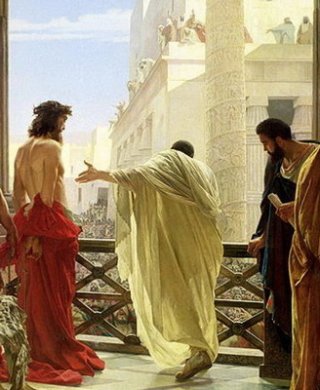 Scourging as a punishment is mentioned in Leviticus and Deuteronomy.

The Jews put criminals to death in four ways; by strangling, burning, slaying with the sword, or stoning. Crimes that were deemed not severe enough for this warranted beating or scourging.

This is something we should keep in mind – criminals who were beaten were not executed, since the judge would not have imposed the death penalty on them.

The makkot of the Talmud described how, and where, the blows would have been given, and for which crimes. The number was usually 39, i.e. one less than the prescribed 40, to ensure that the letter of the law was not inadvertently broken. There was the idea that the body would only be able to take forty lashes before it gave out.

Roman citizens would be birched; flagellation was reserved for disobedient slaves and non-citizens.

Jesus shared our nature when He became man; but he went even further than that when he took upon His unblemished shoulders the debts of our iniquities, and paid for them with His passion and death. He was the sacrificial Lamb of God, treated worse than a common criminal, whose body was flayed, although he was innocent of any wrong-doing.

The Elders, Scribes, and Priests – the Sanhedrin – had their plan ready. They decided that Jesus must die; the fact that the people gave him their allegiance meant, to them, that he was instigating a movement against them, and that could not be tolerated.  However, this had to be done with finesse; so Jesus was taken to Pilate…on a trumped-up charge; a politically astute move since there was bad blood between the Romans and the Jews and this could redress some semblance of public relations between the two factions.

A little background:  At the time, Israel was a dominion of the Roman Empire.  Jews were allowed to hold court sessions, but they could never mete out the death penalty; that of Jesus, they hoped, would come from Pilate.

Pilate would never in a  thousand years consider the blasphemy of which Jesus was accused to be  deciding factor – so they pounced upon the capital offences of claiming sovereignty and  opposing the payment of taxes to Caesar. Pilate saw through this, and his impressions were justified when he interviewed Jesus privately. Yet, and yet, he “washed his hands” of the affair, as he would have done if he literally had blood upon them, to appease his accusers.  He was wounded for our iniquities; He was bruised for our sins.

Moreover, he released Barabbas, because it was festival time, and this was a customary boon obtaining at law that the Romans granted the Jews.

“Are you King of the Jews?”  “What shall I do then with Jesus, who is called King of the Jews?”  Two questions from Pilate, and two replies so diverse that they strike us in their dissimilarity. Two answers, the reverberations of which still echo today… “My Kingdom is not of this world…” “Crucify Him!”

The Holy Way of the Cross depicts three falls to the ground of Jesus. Even one fall would have been a torment. The pain was exacerbated because Christ felt their insatiable hatred.

Sometimes we choose to do what looks good, rather than what is actually the just and correct thing to do. We rationalize that it is for the common good. Who cares if some people do not get what they deserve because we cut corners or lie? Perhaps we fail to do what is right because it might put us at a disadvantage with others.

We blame peer pressure… but resisting temptation has to start somewhere; and if our peers put pressure on us to do what is right, we might not have profited as much, anyway.