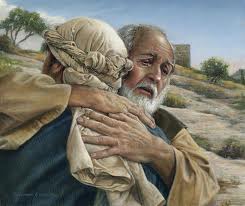 On the Fourth Sunday of Lent this year, we listened at the liturgy to the story of the prodigal son. (cf. Lk 15:1-3;11-32) Early in the account, the evangelist relates how the younger of two sons petitions his father for his share of the estate. (cf. Lk 15:12) A share of the estate is the inheritance which would come to the younger son upon his father’s death. It is shocking that the younger son should have such little regard for his father that all he wants is his dad’s money. We recognize in the son a real contempt for his father, beginning for the son a descent into what the text calls a life of dissipation. (cf. Lk 15:13) What bankrolls the dissipation of course is an inheritance obtained prematurely and squandered swiftly.

In October of last year, we started observing a Year of Faith, recalling jointly the 50th anniversary of the opening of the Second Vatican Council and the 20th anniversary of the publication of the Catechism of the Catholic Church. Faith too is an inheritance; it has been passed on to us. In most cases, our parents saw to it that we were baptized and taught the basics of the faith we profess today. As priests and future priests, we endeavor to do our part to pass on the Catholic faith by preaching, celebrating the sacraments and witnessing to Christ in manifold ways.

The faith we hold is not vague and undefined; it is particular – scandalously so. Not causing us to stumble, particular truths of faith are stepping stones to a deeper relationship with the Lord. Tonight we are bid to consider what we have inherited particularly in the Holy Eucharist, the ministerial priesthood and service to others.

In tonight’s second reading, we have heard Saint Paul’s account of the institution of the Eucharist. In this brief passage, the apostle says he has received the teaching on the Eucharist from the Lord. (cf. 1 Cor. 11:23) In turn, he hands it on to the Corinthians that they might make it the irreplaceable center of their faith. (cf. 1 Cor. 11:23)

The teaching concerns not just a commemoration of what Jesus did at the Last Supper. For we believe that the Lord is really present to us in His Body and Blood, Soul and Divinity under the signs of bread and wine, and that this presence surpasses any other way that He is in our midst. (cf. Mysterium Fidei, 38)

We don’t inherit presence the way we do hair color, height and other characteristics. The Eucharist is not, as it were, in our genes. But the DNA of faith has given us a likeness to Christ. Indeed, it is even suggested to us by Saint Stephen who in his martyrdom imitated the Lord by forgiving those who stoned him. (cf. Acts 7:60) But what about a likeness to the Resurrection? We have of course Saint Paul’s words that Christ will change our lowly bodies to be like His glorified one. (cf. Phil 3:21)

More magnificently though, there is the Real Presence of Christ in the Eucharist which attests to the Resurrection. Msgr. Robert Sokolowski, a professor of philosophy at the Catholic University in Washington, D.C., writes: “[I]n the Eucharist, the risen Christ [is] ‘scattered’ throughout the world even while he subsists within the Holy Trinity. . . . Through the Eucharistic continuance of the Son’s act of obedience, glory is given . . . not only in the heavens but also on the earth.”

We might be able to add a few years on to our lives with good genes. But not even good genes can stop death. The inheritance that does overcome death is the Eucharist. “This is the bread that comes down from heaven so that one may eat it and not die.” (Jn 6:50) The glory of the Eucharist is not ephemeral and passing away; it comes splendidly first to our altars and remains so in our tabernacles. It is a hidden glory, to be sure. But with the eyes of faith, we see what merely natural eyes miss. On this most blessed of nights, we beseech you, Lord, give us always the grace to see your Risen Son whose appearance under the form of bread and wine belies the strength and power of One Who has triumphed over the darkness of the grave.

Big events in the Catholic world invite every kind of speculation and Benedict XVI’s renunciation and abdication of the papacy was no exception. Would this be the moment, some wondered, when the Church’s Latin Rite would finally make celibacy optional for priests? Others were more brazen and issued calls for a married priesthood as a panacea for the Church’s woes. Inasmuch as clerical celibacy has a long tradition in the Church, it can be considered an inheritance. But just how much of clerical celibacy is an inheritance?

Peter Seewald is a journalist whose interview of then-Cardinal Ratzinger became the book Salt of the Earth (Ignatius Press, 1996). Seewald asked the future Pope about celibacy for priests and the answer came with a reference to the Old Testament. “Israel,” the future Pope said, “marches into the land. Each of the eleven tribes gets its land, its territory. Only the tribe of Levi, the priestly tribe, doesn’t get an inheritance; its inheritance is God alone. . . . The land where the priest lives is God.”

In tonight’s gospel, Jesus indicates His intention to wash the feet of the apostles. (cf. Jn 13:4-5) Peter objects and Jesus responds firmly, “Unless I wash you, you will have no inheritance with me.” (Jn 13:8) What, though, could Jesus pass on to Peter but the wealth of the Kingdom?

Peter was a married man (cf. Mk 1:30) and he was likely present when Jesus taught about marriage’s indissolubility. (cf. Matt 19:6,9) In Saint Matthew’s Gospel, the teaching on marriage is linked to Jesus’ teaching on celibacy, that is, “some . . . have renounced marriage for the sake of the kingdom of heaven.” (Matt 19:12)

Jesus in His public ministry addressed the difficulty of abiding in the kingdom of God. They will have it easier, Jesus contends, who give up houses, children and lands and thus gain eternal life by their sacrifices. (cf. Matt 19:29) Again, the former Cardinal Ratzinger comments: “I forego bringing forth further life . . . and I live in the faith that my land is really God – and so I make it easier for others, also, to believe that there is a kingdom of heaven.”

The fact that we – priests and seminarians – are living celibately now does not mean we have a lock on heaven. By no means indeed! But we have embraced a mode of existence which not only gives us more time than most, but more significantly, celibacy signifies the reality of the eschaton in every human life. What we do and how we do it are important to the degree they find their fulfillment in the victory of the Eternal Son over the immanence of time.

We cannot overlook the humility of Jesus washing the feet of the apostles in tonight’s gospel. Almost on a par with this humility is the respect the apostles have for Christ. 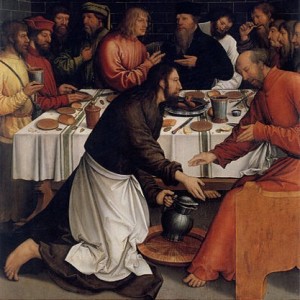 They refer to Him as master and teacher and the text indicates that Jesus accepts these titles. (cf. Jn 13:13) For Jesus, there is no disjunction between what He says as teacher and how He acts as servant. The two are not opposed to each other.

There is a long history in the Church of linking together service with teaching – whether you call these elements the corporal and spiritual works of mercy, orthopraxis and orthodoxy or doctrine and the social gospel. With this long history and our reception of it, we would then have another inheritance and it would once again be a matter of our stewardship.

In recent times, pressure has been mounting to have us de-couple service from teaching and the HHS mandates of the Patient Protection and Affordable Health Care Act of 2010 are but one example. We must resist this pressure because the Church cannot serve interests which inherently contradict what she is, in fact, supposed to uphold by a fidelity to her Teacher and Master. The Church cannot teach one thing through her Magisterium and act in a way which makes a mockery of that same teaching. The Church has a right to maintain her Catholicity all the while she helps people.

At the Last Supper, Jesus prays that the love He has for the Father be in the apostles (cf. Jn 17:26) and that the apostles be consecrated in the truth. (cf. Jn 17:19) This prayer issues forth from the lips of Jesus as He sends the apostles into the world. (cf. Jn 17:18) Love and truth are thus borne by the same messengers. Just as love and truth are borne by the same messengers, so can they be received together by those who have the Gospel proclaimed to them through direct action or service. The correct integration of love and truth, then, reflects how nature and mission coincide, prescribing some measures and proscribing others.

In entering upon the Sacred Triduum, we have opened the door to a rich liturgical feast. At the table of the Lord, we are guests who long to be seated at the banquet of heaven. Before reaching our ultimate goal, we are fed with the gift of finest wheat which has been sanctified by the Lord’s priests, and exhorted to serve one another according to Christ’s model of humility.

In the judgment scene of Saint Matthew’s Gospel, the Son of Man says to the righteous: “Come, you who are blessed by my Father. Inherit the kingdom prepared for you from the foundation of the world.” (Matt 25:34) May we continue to advance along the path of righteousness, giving glory and praise to the Lord Jesus Christ for His mercy and His favor!