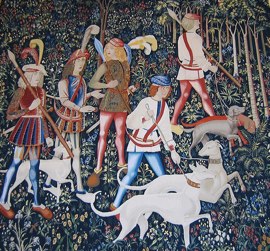 What would happen if you pulled out one thread from the side of this tapestry?

Could you do it without affecting many of the other threads and ruining the whole picture?

The Catholic Faith is like a rich tapestry of intricately interwoven theological threads all connected, tied, and attached to each other.

No where is that more prevalent than in the doctrines concerning Mary.

Many people are tempted to toss aside the Marian dogmas because they seem insignificant. What difference could Mary make in the large scheme of things?

But toss aside the theological truths about Mary (in particular the Immaculate Conception) and you mar the whole picture of Catholic theology. That’s because, surprisingly, the truth about Mary is tied to everything, particularly the destiny and greatness of the human person.

What is the Immaculate Conception?

In 1854 by Pope Pius IX proclaimed the dogma of the Immaculate Conception:

“The most Blessed Virgin Mary was, from the first moment of her conception, by a singular grace and privilege of almighty God and by the virtue of the merits of Jesus Christ, Savior of the human race, preserved immune from all stain of original sin.”

This means from the first instant of her life, her conception, Mary had the fullness of God’s life in her soul. There was no time in her life when she did not.

To understand the implications of this, you have to understand original sin, what mankind was like before the Fall, and our destiny at the end of time.

Adam and Eve were different from you and me

In the beginning, mankind was created with the fullness of sanctifying grace. God formed man from the muck of the earth and breathed life into him. Thus, the supernatural life of God dwelled in his soul from the first moment of existence.

One was a special knowledge of divine things. Also, they could not suffer, or age, or die. And this is the most important part, their emotions perfectly obeyed reason.

No flying off the handle in rage, no temptation to overeat, no envy, no lust. Suffering, disease, death, all of those uncontrollable emotions that have a hold on us–all that comes from original sin. Oh…and also the frustrating tendency to sin and then sin some more.

What is Original Sin?

As I said before, original sin is more of a deprivation than something added on. When we’re created, at the moment of conception, God infuses a soul and makes a living person. It’s the soul that gives life to the body. If there’s no soul, the body is dead.

Unlike Adam and Eve, when God infuses a soul into a person with original sin, it’s a soul without sanctifying grace.

It’s like we inherit a debt. When  Adam and Eve sinned, they lost a great treasure we should have inherited. However, since they didn’t have it when they died, it can’t be ours to receive…at least not naturally.

We get sanctifying grace back at Baptism. But even if a baby is baptized one week after birth, that’s still nine months and one week with original sin. And that means this baby will have the effects of original sin–suffering, death, uncontrolled emotions, and sin.

How does this relate to the Immaculate Conception?

Remember the definition? Mary was conceived without original sin. That means, at conception, God infused a soul into Mary with sanctifying grace.

She was created just like Adam and Eve. She had all the preternatural gifts and none of the effects of original sin.

Many things flow from this:

The Marian doctrines are deeply connected and interwoven throughout Catholic theology.

Sin, grace, redemption, heaven, holiness, and the Second Coming–you can’t remove Mary without removing them and what we know about the nature of the human person and salvation.

In Mary we understand who we are and who we’re supposed to be. She illuminates the mystery of sin and the truth about the conflict in our souls. And, Mary shows us our future…our glorious destiny living body and soul for all eternity in heaven.

Marc Cardaronella writes about catechesis, evangelization, and the intersection of the two. A former Navy pilot, he gave up the fast life for a more rewarding career as a Director of Religious Education. You can find more of Marc  on his personal blog, Evangelizing Catechesis.