I bumped into this icon recently at Charleston Vocations: 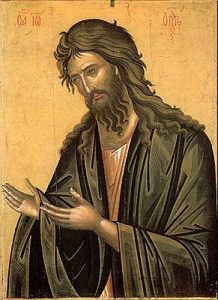 Look at all that cryptic writing at the top…what does it say?

I like to translate as much icon Greek as I can just for the exercise. Because I use icons and other Greek art in Sunday School, I have to know what they say: the kids always ask about the funny marks. And it’s good for Catholic kids to get a little exposure to Greek beyond Κύριε ἐλέησον*. The Greek on this icon is too fussy for 6th-graders; but not for you catechists, so let’s have a look (click the image for a bigger version).

On the upper left of this icon is a typical abbreviation, OA IO: O Agios Ioannis/ O Άγιος Ιωάννης/ The Holy (sanctus, saint) John (ω is lower-case Ω, O-mega, big O). Now on the right…uh-oh…a Led Zeppelin** symbol? It doesn’t even look like Greek. But it pays to be patient…an M or Y…above that, a D/Δ or an L/Λ. Then…R/P…P/Π…O…S/ς. Ha! O Pródromos, the Forerunner! But it’s as much a puzzle as an abbreviation. The M (not a Y) overlays the P; the D (not an L) sits on top of them. R and O have to be pronounced twice: once in PRO, then in DRO. So the whole icon reads O Άγιος Ιωάννης O Πρόδρομος, Saint John the Forerunner. The West would never have made it so complicated- or so artful.

There are apparently some traditional limits as to how far an iconographer can go in playing with the letters. This recent icon by Efrem Carrasco is very similar, but not identical: 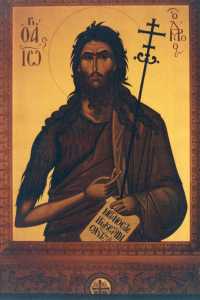 This very old mosaic in Hagia Sophia is more conservative, although it still is free with the letter arrangement. Maybe in Justinian’s day the idea of letters-as-art wasn’t so advanced. 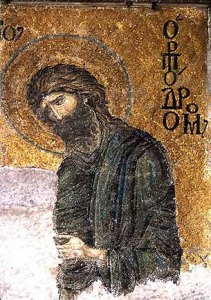 Another mosaic, this one in Thessaloniki; not like the others, in that a single O does triple duty (pro-dro-mos). But still on the same page, so to speak: 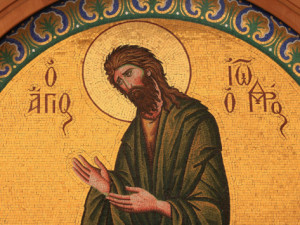 But I’m happy that iconographers can still just spell it all out if they are so moved. Here’s a recent work by Ελισάβετ-Ειρήνη Μιχαηλίδου (Elisabet-Irene Mikhailidou): like St. Lucy having her gouged-out eyes in her head and on a plate at the same time, martyred John is both decapitated and intact. 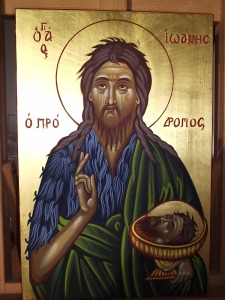 And all the words have all their letters. O AGIOS IOANNIS / O PRO…DROMOS, The Holy John / The Forerunner. As we say in the South: Thank Ya, Jesus, I can read!

**For those too young to know: