I got an amazing education from Franciscan University of Steubenville.

Yet I missed out one of the best educational opportunities they provided. 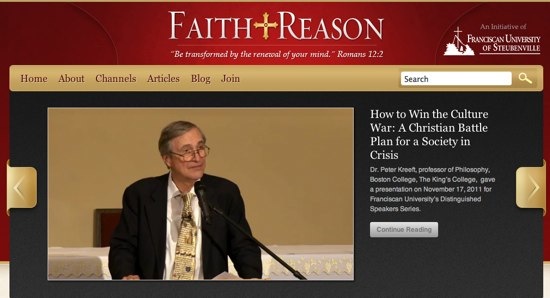 The Faith + Reason website is a new online initiative from Franciscan University of Steubenville that makes great Catholic presentations given at the university available to the public.

It’s the stories that you tell…

There were a lot of great things about being a student at Franciscan.

One of the best was all the fantastic Catholic speakers that came to visit. Every week there was someone new.

I’m talking big names. Some of the best speakers around. Sometimes they were there for symposiums. Other times they were just passing through. And then, there were the summer conferences.

In case you didn’t know, Franciscan University puts on conferences…big conferences…all summer long. And they have some awesome speakers.

The Saturday night general sessions were always open to the students and it was amazing to drop in and see Dr. Scott Hahn, Fr. Benedict Groeshel, Fr. Stan Fortuna, Ralph Martin, or George Wiegel. One time I even met Fr. Groeschel walking the campus and he gave my wife a blessing when she was pregnant with our first child.

How I missed out

However, I was kind of a nervous student at Franciscan. I always studied way more than I needed to. I think it was the Navy that did that to me.

It was very good for grades, but unfortunately, I missed out on a lot of great presentations.

My wife always tells everyone how she got to see Alice Von Hildebrand, even though she wasn’t a student, and I didn’t because I was too busy studying. Sigh.

Well now all those great presentations are available to everyone…even poor, beleaguered students (like me) that study way more than they have to.

Franciscan University just launched a new website called Faith + Reason. It has videos and articles from Catholic speakers that visit the campus. And, some awesome speakers that are always there as professors.

Right now there are videos there from Scott Hahn (of course),  John Bergsma, Jeff Cavins, Peter Kreeft, and Fr. Andrew Apostoli. There’s also articles and commentaries on the Sunday readings.

I think this could be a great tool for enriching catechists formation. Having access to great Catholic thought from some of the best minds around will definitely increase their faith and give them greater insight into what they teach.

Even more so, it could be a great resource for those considering, or re-considering, the Catholic Faith–a place where they can be exposed to the best teaching the Catholic Church has to offer.

St. Augustine didn’t convert until he found someone who could make Christian faith reasonable.  Someone who could talk about it eloquently. Until he heard St. Ambrose, Christianity was just a crude, underdeveloped philosophy to him.

Years ago, I saw a comment on one of Fr. Barron’s You Tube videos that really struck me. The commenter couldn’t believe they’d heard their favorite French philosopher mentioned on You Tube…and it was by a Catholic priest!

Hearing real, faithful, and reasoned teaching on the Catholicism is one of the best ways to draw people to the Faith. Catholicism is so misunderstood. Sometimes it takes hearing the best speakers to open someone’s eyes to it’s beauty and wonder.

The Faith + Reason website will be a fantastic tool for the New Evangelization. Point someone to it today at www.faithandreason.com.

And maybe now I can catch up on all the good stuff I missed.

To find out more about catechesis and the New Evangelization, visit my blog: Evangelizing Catechesis.