In March of 2009, the United States Conference of Catholic Bishops issued a document declaring the practice of Reiki (pronounced RAY kee) incompatible with Christian teaching and scientific evidence and therefore inappropriate for Catholic institutions to promote or support. The actual document can be found as a pdf here.

Scandalously, many churches, Catholic hospitals, and retreat centers continue to offer Reiki as a “healing practice” despite the Bishops’ clear condemnation. It is important to understand what Reiki is and why it is so dangerous to the practice of authentic Catholicism.

Reiki originated in Japan in the late 1800s and was invented by a man named Mikao Usui. He was a well-educated man, having traveled to both Europe and China to study. Usui was a successful businessman and was interested in arts, medicine, Buddhism, and was a member of the Rei Jyutu Ka, a metaphysical group dedicated to developing psychic abilities.

It is said that in a difficult period of his life when his business was failing and he was feeling spiritually empty, Usui was atop Mt. Kurama fasting and suddenly received a “Reiki” over his head. He was then infused with the Reiki, was healed spiritually, and acquired the Reiki cure. From whom he received this “gift” is not mentioned. After this experience, Usui took himself to Tokyo and in 1922 he opened a center for training and cures in Reiki practice.

Reiki was brought to the West by a woman named Hawayo Takata in 1937. She was raised in Hawaii by Japanese parents and on a trip to Japan became ill, eventually seeking the healing of a Reiki master and later becoming one herself. She left Japan prior to World War II and spent thirty years practicing and teaching Reiki in Hawaii.

So what is Reiki? Reiki is comprised of two words, “Rei” which means “God’s wisdom” and “Ki” which means “life force energy”. It is a practice of stress reduction and relaxation that is said to promote healing. The technique is to minister by “laying on hands” and is based upon the idea that an unseen “life force energy” flows through us and is what controls our physical and spiritual health.

It is interesting to note that the techniques for laying on hands are taught by Reiki Masters but the Reiki itself, the healing force, is said to be passed from teacher to student via an “attunement” which opens up a well of life force energy. People who have experienced attunement report undergoing such life altering changes as having their third eye opened, increased psychic abilities, releasing of negative feelings and energy and, oddly, a change in food preferences. Other people claim to feel absolutely nothing. It seems to be a hit and miss kind of thing.

Like many New Age practices Reiki is merely a hijacked Eastern philosophy with Pantheistic roots, some elements of Christian doctrine and a dash of self deification. The story of Mikao Usui climbing a mountain and returning with supernatural powers is designed to evoke the forty days Jesus spent in the desert before His death, or Moses’ time in the desert or Mohamed’s. Even the idea of passing the power along in a formal attunement takes liberally from the apostolic succession of the Catholic church.

In using the familiar concepts and terminology of legitimate religious traditions, the Reiki master makes people of faith comfortable with a practice that defies logic and is at a cross purpose with the practice of Christianity. This life force of which they speak can be likened to the Christian doctrine of the soul. While we, as Christians have never claimed scientific evidence to prove the existence of our souls, it is a matter of faith. We do not believe that the soul is moveable from one to another, nor is it a healing force. Our doctrine calls for healing of a soul through confession, prayer, spiritual direction, reception of the Blessed Sacrament, and the like. The soul itself does not heal. Rather it enables us to seek the healing grace provided by God through the sacraments.

From the International Center for Reiki Training’s publication, A Brief Overview:

“The knowledge that an unseen energy flows through all living things and is connected directly to the quality of health has been part of the wisdom of many cultures since ancient times. The existence of this “life force energy” has been verified by recent scientific experiments, and medical doctors are considering the role it plays in the functioning of the immune system and the healing process.”

Since the “energy force” is unseen it would really not be verifiable by any reputable medical practitioner thereby making that statement a falsehood. Any role an unverifiable force in the body could play in healing would be a figment of the patient’s imagination, or the power of self delusion,

Also from the same publication:

This, again, tries to liken the Ki with the Christian concept of a soul but fails in that, as we know, all life comes from God. The life of grace that is our soul will not die but will experience everlasting life. What kind of everlasting life is up to the person in question.

Reiki masters claim that Reiki is not a religion or even spiritual, rather it’s the use of the body’s own force to heal. Since there is no scientific method of qualifying this and there is an entire culture built around Reiki, it is hard to see how it can be anything but a spiritual practice. Certainly the laying on of hands, a key component of the healing, speaks to many healing rituals in many faith traditions.

There are even five principles that Reiki followers are supposed to adhere to:

Rather kindergartenesque as far as creeds go, but it certainly expresses a spiritual ideology.

It is particularly strange and somewhat horrifying that Reiki is practiced in Catholic institutions all over the country. A retreat center not far from my house offers Reiki and massage at every weekend retreat. I think you need to seriously rethink your spiritual life if your idea of a Catholic religious retreat is to disrobe and have someone lay hands on you.

When meaningless and incongruous acts are performed within the context of a real religious service or ritual it is superstition. To add superstition to a Catholic retreat truly is exposing the attendees to sin. It also exposes them to forces that may try to use this spurious laying on of hands to thwart the will of God and cause serious spiritual harm.

When confronted, many Catholics who practice Reiki or receive the “treatments” claim that it can be Christianized, and invocations to the Holy Spirit and such accompany the healing ritual. This justification simply does not hold up. There is no need to take a non-Catholic spiritual practice and try to force it to be something it isn’t. Our faith provides all that we need in terms of spirituality. 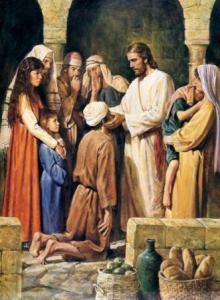 Things that are good, true, and beautiful have no need for extra Christianization since the author of all that is good and true and beautiful clearly provided them. Things that are not good, true, and beautiful have no place in Catholic circles. It is for this reason that it is incumbent upon all faithful Catholics to be aware that there is no place for New Age practices of any kind in our worship, rituals, practices, or prayers. If something is added in the name of “spirituality” or “enlightenment,” be sure to question why Catholics need to import from other sources when our faith was given to us by the Source of all truth.

Catholicism is by itself a whole and complete worship with no need of spurious addends. When the faithful are well-educated and well aware of what is consistent with our faith and what is not, their radar should be well-tuned to weed out superstition and heresy.

Mary Ellen Barrett is a home educating mother of seven children. She writes a column for The Long Island Catholic called "Our Domestic Church" and speaks at conferences about homeschooling and raising a special needs child. Mary Ellen writes about the daily life and happenings in her Catholic home on her weblog, Tales from the Bonny Blue House and about a Catholic celebration of Christmas at O Night Divine.

She is currently at work on a book about life as a mom of a large family and an Advent Book of Days.