Stripped down to its barest essentials, power is the ability to put an idea into practice. To be sure, how we exercise power is an important matter, but first we must know what it is before we wield it.

In the ancient world, there was no better concrete expression of power than the Roman Empire. The Romans had the best schools and the most learned teachers. Their armies, which marched all over the known world at the time, scored victory after victory and subdued every foe. Roman engineering feats – bridges, great buildings and the like – were the envy of those seeking some permanent reminder of achievement. All of these things testified to Rome’s power, but perhaps nothing was more emblematic of Roman power than the law.

Long after Roman schools had passed out of existence, long after Roman armies had stopped conquering enemies and long after their buildings had been reduced to rubble, the power of Rome was still being felt through the law. The Romans had been notable for developing a system of law that sought justice over caprice, and planted the concept of giving each person his due everywhere they went. History shows that material and physical accomplishments can be leveled to dust quickly, but not so the longing and passion we have for justice.

Early in the passion account of Saint John, Jesus appears before Pontius Pilate, the personification of Roman law, to 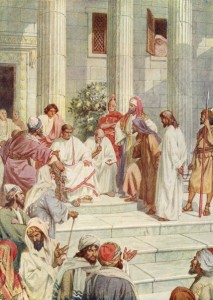 answer the charge that He is a king. (cf. Jn 18:33-38). Jesus links kingship with the truth in His reply to Pilate, acknowledging that the reason He came into the world is to testify to the truth. (cf. Jn 18:37) Pilate is mystified, however. “What is truth?” he muses. (cf. Jn 18:38) It is not enough for the Roman authority in Palestine to be cavalier in his attitude about the truth, he even says in reference to Jesus: “I find no guilt in him.” (Jn 18:38) Not finding guilt in Jesus, Pilate still – amazingly – does not treat Jesus justly. Instead, he acts on the Jewish custom of releasing a prisoner at Passover, allowing the guilty Barabbas to be spared over the innocent Jesus. (cf. Jn 18:39)

In Christ, One Who is innocent and blameless in every way is condemned to death. (cf. Jn 19:16) What then can we say of power in the case of Jesus? It has been grossly misused against Him. It has been utterly debased, placed at the service of falsehood and compromise. Honor and integrity have been sacrificed in favor of cowardice and pusillanimity.

Holy Week always brings into sharp focus the central mysteries of our Christian faith. From Palm Sunday to Easter Sunday, the Church invites us to witness to and share in the rites by which we claim salvation in Christ. It would be a mistake, however, if through our witness and participation we did not stop to consider this week what is the true meaning of power in our lives.

For some of us, power is found in always getting our own way. We unfailingly manipulate situations so that we always come out on top – we won’t tolerate any other outcome at home, at work, or wherever we may find ourselves. We relish the feeling of having it “one up” on those around us. For others among us, power is in calculating how to make the most number of people dependent on us, thereby satisfying our need to be needed. There is enormous ego pleasure in knowing we are indispensible to others. For still others, power is in being above the fray, detached, and untainted by the vicissitudes of life. 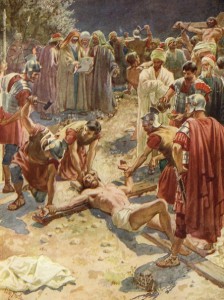 Holy Week shows us a beaten and dejected Savior. Bearing our infirmities and laying upon Himself our guilt (cf. Is 53:4,6), He challenges us to shake off our false notions of power – whatever they may be and in whatever form they may take. Power is not in what I cling to and what I hold on to; it is in how I empty myself, as Saint Paul indicates for us in today’s second reading. (cf. Phil 2:6-7) The Lord’s obedience unto death (cf. Phil 2:8) is the real power at work in His life and in our lives too – if only we allow it to be so.

Let us be alert to the Lord’s power here at this Eucharist. May it cleanse us of our sins and make us the new creations promised by the Resurrection!