The April 11 class introduced the Mass and covered the Liturgy of the Word; it was a straightforward lesson plan. The April 18 class is the first of two on the Liturgy of the Eucharist, which are way more dynamic. Lots of drawing accompanied our progress through the Missalette. Kids love to think big and draw conclusions; they were so adept at integrating Bible stuff they’d learned this year into the Mass that I think it was the best class I’ve ever had in 11 years of catechizing. Everything we discussed has been covered in older posts; this one will stick to the graphics, and skip most of reading and discussion.

The board from April 18:

1. Recap of the word Liturgy/ Leitourgos, the People’s Work. It matters that we have to provide the bread and wine; Jesus won’t make his Body & Blood out of wheat & grape juice.

2. Referring to the Missalette, we start with God’s gifts to us of wheat & grapes. We do the “work of human hands” and transform them into bread and wine. This offering isn’t a valuable enough sacrifice to atone for our sins, so we ask God “that it may become for us the Body and Blood of your most beloved Son, our Lord Jesus Christ.” [Body & Blood were later erased.]

3. So there is People-work and also…God-work. Yes. And if there is worship on Earth, then there might also be…worship in Heaven? Yes. In fact there’s a bit of Revelations that my Bible calls the “Vision of Heavenly Worship,” so let’s have a look at that.

4. I read and draw: “I was caught up in spirit. A throne was there in heaven, and on the throne sat one whose appearance sparkled like jasper and carnelian.” Who’s on the throne? Jesus! No! God! Which flavor? God the Father! Yes. “Around the throne was a halo as brilliant as an emerald. Surrounding the throne I saw twenty-four other thrones on which twenty-four elders sat, dressed in white garments and with gold crowns on their heads.” Remember from the Greek word for elder we get the word...priest. Yes.  How many per side? 12? Yes, but I’m not drawing all of them. Tell me about what 12s might be right around the throne…12 apostles! Yes, and…Israel had some sons…Israel’s 12 sons! Not just the sons, the descendants too…the 12 tribes! Yes. Both Old and New Testaments, and Old and New…Covenants? Yes.

“In the center and around the throne, there were four living creatures covered with eyes in front and in back…each of them with six wings. Here’s one of them, usually in art they’re are shown as a head with 6 wings. Six-winged creatures are usually Seraphim, fiery ones, kind of like Cherubim, the near ones.”

“Day and night they do not stop exclaiming:

Where’ve you heard that before? At Mass! Yes. “[T]he twenty-four elders fall down before the one who sits on the throne and worship him, who lives forever and ever.” There it is, Heavenly Worship. “Then I saw standing in the midst of the throne and the four living creatures and the elders, a Lamb that seemed to have been slain.” There ya go, blood’n’everything. Why’s the Lamb bloody? ‘Cause he was crucified. Yes.

“[The four living creatures and the twenty-four elders fell down before the Lamb. Each of the elders held a harp and gold bowls filled with incense, which are the prayers of the holy ones.” Here’s the incense going up. And if they have harps what are they doing? Playing them. I mean besides that. Singing? Yes. “They sang a new hymn.”

5. So all that’s going on in Heaven, a lot like what we do on Earth. We sing hymns, and burn incense. And this is…the altar. Yes, and it’s also…a table. Yes, thank you…why? ‘Cause we eat the Last Supper! Yes. This guy is...the priest, and he’s offering…Body’n’ Blood! Not yet! It’s still bread’n’wine. [More reading & discussing Eucharistic Prayer 1] The arrow from Earth to the Father passes through the Lamb to show we don’t go straight to the Father. This will matter next week, when we see the Lamb is both our High Priest and the Offering.

6. To help understand the Consecration, we look at my all-time favorite handout: 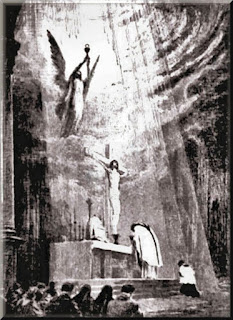 I draw a tornado to introduce the idea of Heaven and Earth being connected for a short time. That goes well with the swirly stuff above which I call the Holy Tornado. Now I go back to drawing 5, and add a Holy Tornado to connect Heaven and Earth. I also add an altar in heaven behind the Lamb, per: “command that these gifts be borne by the hands of your holy Angel to your altar on high.”

7. Our planet with worldwide Masses going on 24/7, and Holy Tornadoes continuously connecting Heaven to Earth. “For from the rising of the sun to its setting my name is great among the nations, and in every place incense is offered to my name, and a pure offering.”

8. As usual, someone asks if it’s really Jesus’ Body & Blood. I draw the Food Pyramid. We look at each of the miracles 1 through 5; the kids agree they were real miracles, not symbolic. Then the Pyramid is capped with the Last Supper miracle. Would this make sense:

c. Then at the Last Supper he just does something symbolic? No way.

The horizontal line separates the top miracle from miracles 1-5, which had only physical significance. This emphasizes that the Last Supper miracle had a spiritual component the others lacked: “Your ancestors ate the manna in the desert, but they died; this is the bread that comes down from heaven so that one may eat it and not die.”

The next class is the last class of the year in which we wrap up the Liturgy of the Eucharist with special attention to Jesus acting as the High Priest per Leviticus and the Epistle to the Hebrews; and how that role fits into the liturgy in a Catholic church.