On a cool autumn night more than thirty years ago, the words of today’s gospel rang out in Yankee Stadium. They were proclaimed in the House that Ruth built as Pope John Paul II celebrated Mass. Commenting on this passage from Saint Luke, the Holy Father said then:

The appropriateness of the parable of the rich man and Lazarus for proclamation during the pontiff’s first pastoral visit to our country could scarcely be questioned. The United States was then and continues now to be the most affluent nation in the history of the world. Millions and millions of people have become materially rich in America. Even more people have known an unparalleled political freedom here. 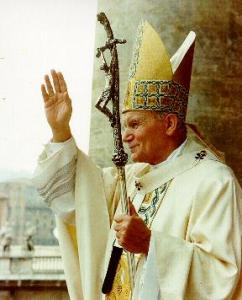 In the view of some, the pilgrim Pope had come to the shores of America to afflict the comfortable. To others, he was preaching the Gospel of a preferential option for the poor. To those who accept Michael Harrington’s analysis, the Pope was exposing the other America.

The other America, of course, is poverty, the other side of wealth. There is no getting away from the fact that there are two sides. In today’s gospel, Our Lord indicates that following death, both the rich man and Lazarus are separated by a great chasm. (cf. Lk 16:26) It prevents anyone from crossing from one side to the other. (cf. Lk 16:26)

It is clear from the text that one side is heaven and the other is hell. One side is in the bosom of Abraham (cf. Lk 16:22) and the other is a place of torment. (cf. Lk 16:28) The rich man has brought this judgment upon himself because he failed to attend to the needs of the poor man Lazarus lying at his door. (cf. Lk 16:20) He preferred during his earthly life to dine sumptuously every day. (cf. Lk 16:19)

In his homily of thirty years ago, the Pope also said that the Church cannot limit herself to the social fruitfulness of the Gospel. “Along the road that leads the Church to man,” he stated, “she does not offer . . . only the earthly fruits of the Gospel; she brings to man – to every human person – his very source: Jesus Christ.” (Homily at Yankee Stadium)

We all recognize Lent as the season of re-committing ourselves to a care of the poor among us. And certainly we must bear in mind the very serious words of Our Lord that our judgment and salvation hinge on assisting those who are materially deprived. Let us not forget, though, the words of the Pope. The Church is to bring us to Jesus Christ. This is why we evangelize; this is why we catechize; this is why we form men and women in discipleship; this is why we share in the sacramental life.

One of the troubling tendencies pastorally is the widespread acceptance that religion now is just helping people. There is a growing horizontalism which considers prayer and the interior life irrelevant before the main task we have of improving the conditions of the planet. I don’t think this is unrelated to the indifference there is to religious and spiritual doctrine in the midst of the world’s diversity and pluralism. Since there are so many competing ideas about God and there is a reluctance to say which ones are right, it is best to stick with just helping people and the rest will take care of itself.

Pope John Paul II’s successor, Benedict XVI has visited the United States, too, and even before his visit nearly four years ago, he spoke to this problem in his first encyclical, Deus Caritas Est (2005). He wrote then that “it is time to re-affirm the importance of prayer in the face of the activism and the growing secularization of many Christians engaged in charitable work. Clearly, the Christian who prays does not claim to be able to change God’s plans or correct what he has foreseen. Rather, he seeks an encounter with the Father of Jesus Christ.” (DCE, 37)

To encounter the Father of Jesus Christ is the purpose of priestly formation now. As seminarians, you ought to be engaged in the very serious work now of developing capacities and aptitudes for knowing God in the often subtle ways He touches our hearts. For this is what you will be helping others to do later on in your priestly ministries.

We all need to listen to Moses and the prophets. (cf. Lk 16:31) Even more than that, we all need to listen to the One who has risen from the dead. (cf. Lk 16:31) The Eucharist is the bridge connecting one side to the other. It connects the rich and the free with the poor and obedient Christ. We rise here with Him, having found the deeper meaning of wealth under the easy yoke of the Cross. Our trust, the prophet Jeremiah reminds us today, is not in human beings. (Jer 17:5) It is in the Lord, he says. (cf. Jer 17:7) So, too, is our hope. (cf. Jer 17:7)
Praised be Jesus Christ!