Some highlights from the March 7 class, the Resurrection through Paul’s commission. The Bible wants to tell the story, so I let it. All verses were already highlighted in my lecture Bible. I didn’t flip back to actually read the John da Baptis’ quote, that’s something we covered a few months ago.  The kids just needed to hear it on the fly this time. Otherwise readings are from the last bit of Luke, the last bit of John, and Acts starting at Chapter 1. Almost no flipping back & forth. Easy.

“… she turned round and saw Jesus standing, but she did not know that it was Jesus. Jesus said to her, “Woman, why are you weeping? Whom do you seek?” Supposing him to be the gardener [?!], she said to him, “Sir, if you have carried him away, tell me where you have laid him…”

The apostles didn’t recognize Jesus either:

“That very day two of them were going to a village named Emmaus, about seven miles from Jerusalem,  and talking with each other about all these things that had happened. While they were talking and discussing together, Jesus himself drew near and went with them. But their eyes were kept from recognizing him.”

“Just as day was breaking, Jesus stood on the beach; yet the disciples did not know that it was Jesus.”  Of course if I were freed from the consequences of Sin, you might not recognize me right away either.

On Easter evening, the Apostles were scared: 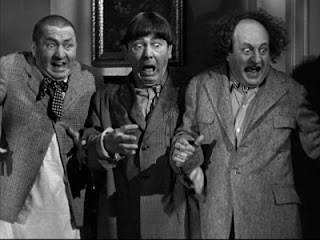 Over the next 40 days, Jesus pops in and out of spacetime to visit occasionally with the apostles; they are still a bit vague about Scripture and prophecy and all that stuff. Jesus helps them out :

“O foolish men, and slow of heart to believe all that the prophets have spoken! Was it not necessary that the Christ should suffer these things and enter into his glory?”  And beginning with Moses and all the prophets, he interpreted to them in all the scriptures the things concerning himself.”

“These are my words which I spoke to you, while I was still with you, that everything written about me in the law of Moses and the prophets and the psalms must be fulfilled.” Then he opened their minds to understand the scriptures…”

Regardless, the apostles remain unclear about the Messiah business. Still expecting a David:

“Lord, will you at this time restore the kingdom to Israel?” Poor guys need some direction.

And they’re at loose ends. Some return to their old jobs:

“Simon Peter, Thomas…the sons of Zebedee, and two others of his disciples were together. Simon Peter said to them, “I am going fishing.” They said to him, “We will go with you.” They went out and got into the boat; but that night they caught nothing.”

But John da Baptis’ had foretold:

“…he will baptize you with the Holy Spirit and with fire.” Huh…that might be motivating.

Before ascending, Jesus & Peter orally re-establish Peter’s contract to be the #1 person in charge of the flock:

“Peter stood up among the brethren (the company of persons was in all about a hundred and twenty), and said… “one of the men who have accompanied us during all the time that the Lord Jesus went in and out among us, beginning from the baptism of John until the day when he was taken up from us–one of these men must become with us a witness to his resurrection.”

So if an apostle dies…you make another one! Yes. Peter quotes King David to reinforce the idea that being an apostle is a kind of office:

“his bishoprick let another take.”

They tentatively pick two disciples, Barsabbas and Matthias.  But the the apostles lack a certain confidence, and leave the final choice to the Holy Spirit:

“And they cast lots for them, and the lot fell on Matthias; and he was enrolled with the eleven apostles.” What’s “casting lots”? Like rolling dice? Yes, or flipping a coin.

As soon as there are 12 apostles again, they all get yet another extra dose of the Holy Spirit:

“When the day of Pentecost had come, they were all together in one place. And suddenly a sound came from heaven like the rush of a mighty wind, and it filled all the house where they were sitting. And there appeared to them tongues as of fire, distributed and resting on each one of them. And they were all filled with the Holy Spirit and began to speak in other tongues…” 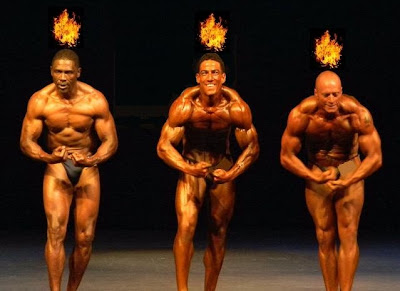 they ain’t scared no more
.

“Hey, do you boys know what a crab pose is…what bodybuilders do? Me! Me too! Good…nobody else? Can y’all do a crab? Yes! OK y’all two get up here. Don’t crab ’til I tell ya. Now after the apostles got their third dose of the Holy Spirit at Pentecost, did they continue to lock themselves up and hide? No! So what did they do instead? They went everywhere & told people about Jesus! That’s right…they were fearless, they went all over the place spreading the Gospel and  setting up the Church. All but John were martyred, so they were way-tough guys. Now you two are gonna show everyone how tough and fearless and motivated and fired-up the apostles were. Ready…set…CRAB! Yaaaah! Arrrgghhh! Great job! Just look at these super apostles! OK…that’s enough crabbing…y’all can sit down now.”

Saul the Christian-hater is personally visited by Jesus, but that doesn’t prepare him to do anything. Instead he’s blinded. His sight is restored by an authorized Christian doing what? Touching his eyes! Great guess, but no! Laying hands on him! Yes! Are y’all surprised? No! Smarties.

“The Lord said to him in a vision, “Ananias.” And he said, “Here I am, Lord.” (Who said that to God in the Old Testament? Samuel! Yes! How many times? Three! Yes!)  And the Lord said to him, “…inquire…for a man of Tarsus named Saul; for behold, he is praying, and he has seen a man named Ananias come in and lay his hands on him so that he might regain his sight.” So Ananias departed and entered the house. And laying his hands on him he said, “Brother Saul, the Lord Jesus who appeared to you on the road by which you came, has sent me that you may regain your sight and be filled with the Holy Spirit.” And immediately something like scales fell from his eyes and he regained his sight. Then he rose and was baptized.”

Saul and Barnabas are “set apart” like Samuel and Samson and John:

“Now in the church at Antioch there were prophets and teachers, Barnabas, Simeon… Lucius of Cyrene …and Saul. 2 While they were worshiping the Lord and fasting, the Holy Spirit said, “Set apart for me Barnabas and Saul for the work to which I have called them.” What sort of Catholic persons are set apart today for special work? Priests? Yes, and…nuns?  Yes, good.”

The “prophets and teachers” lay hands on Saul and Barnabas:

“Then after fasting and praying they laid their hands on them and sent them off.” Hey, guess what a bishop does when he makes a man into a priest? Lays his hands on his head? Yes, good.

Only after this laying of hands is Saul now known as Paul. He has a new name like who else? Abraham & Sarah. Yes, and …Isaac! No, but you mean Jacob. His name was changed to…starts with an ‘I‘ like Isaac…Israel! Yes, and…Peter! Yes, which means…rock, yes, or…stone. Yes, like the cornerstone. And in Spanish? Piedra. Yes. Pedro is the piedra.

That’s it for tonight. Next week we’ll see how the apostles and Paul continued to spread and organize the Church.