I just read a headline over at Franciscan Media and it gave me pause –  How many Lents?

I literally stopped what I was doing and started thinking over my long life. How many Lents indeed.

How many years of childhood when the fasting was so enjoyable because everyone was doing it together. We didn’t have our usual after school snacks of cookies and milk, but I don’t remember what Mom substituted. I don’t seem to have suffered from it, whatever it was.

We always abstained from meat on Fridays, so I’ve eaten my fair share of tuna noodle casserole, peanut butter and jelly, macaroni and cheese, and grilled cheese. We certainly didn’t go to Legal Seafoods on Fridays, but again, no worse for the wear.

There was a fish fry at my parish every Friday in Lent. The Holy Name Society had a fish fry every First Friday the rest of the year, so we were used to that, too. In fact, we looked forward to it. I’m sure the fish was some nameless brand of perch (Exactly what IS perch? I only know it’s not tilapia, cod, halibut, flounder, sole, snapper, sea bass, salmon, orange roughy or swordfish.) We didn’t care because it was obviously plentiful and inexpensive. And besides, EVERYONE was there!  No Friday night movies for us because we’d go to the church afterwards for the Stations of the Cross.

My high school memories are a little more blurry. But the menu always predominates. NO MEAT! In fact, I think we abstained on Wednesdays, as well.  What was wonderful about the abstinence was that it satisfied that tiny voice of conscience that always tried to rear its ugly head when temptation crossed our paths. No, thank you. I gave up candy for Lent.  Even our non-Catholic neighbors respected our abstinence rules and helped us to remember when we were playing at their houses. And there were always the Stations of the Cross. To this day, I have never tired of them.

That being said, I must confess that in college, I almost gave up Lent for Lent. Sad to say, at my secular university, there was little support for it from our up-to-date Newman Center chaplain. If a ski trip came in Lent, that quiet voice became almost silent. I know I had a few hamburgers on Fridays, but I still managed to think of something to give up for the season. 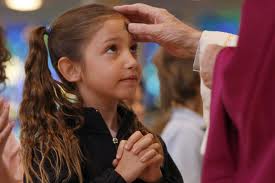 Ash Wednesdays. I remember them most of all. It was truly exciting, lining up at the altar rail when I was very young, then standing to be reminded that I am dust and unto dust I shall return. Always chilling, always sobering, but also exhilarating. I was in good company after all. All of us dust-bunnies-to-be were in this together. It couldn’t be THAT bad. In fact, it wasn’t. It was wonderful to be in company with future saints. Though we really didn’t talk about it. We knew the stories by heart, though. We knew that Saint Dominic Savio and Saint Therese of Lisieux had taken their ashes, too. And where they led, we could follow.

In the world of teaching, it was sometimes a challenge to wear those ashes to the faculty lunch room. In fact, sometimes I would take my tomato soup and saltines to my office instead. Then it was just me and God over lunch. I’d apologize for my weakness. This was certainly NOT what Dominic and Therese would have done! As a result of our little “conversations”, my penances became a little different about that time.  Several years, in addition to the “giving up”, I added a positive action. Besides almsgiving, I tried on a little more kindness. In addition to cheese, or eggs, or butter, I gave up being impatient. At least I tried to.

As I think back to those many Lents in the past, I look forward to my next one with borderline glee. I remember my dear mother, who, faithful Catholic that she was, went along with the changes in the early seventies, but never stopped bemoaning two things: that the rule about abstinence on all Fridays went by the wayside, and particularly, that the season of Septuagesima, or pre-Lent, had been dropped in the new calendar. She was fond of reminding her children and friends, and even my non-Catholic father, that we human beings are weak and our wills have been compromised by original sin, so the Church knowing that all too well, in her wisdom, gave us reminders and assistance along the way, among them abstinence and a prelude to Lent.

This Sunday is Septuagesima Sunday. I will rejoice at Mass and think so fondly of my mother’s affection for it, and remember why the Church offers us this wonderful season as a preview of the reasons for our upcoming Lenten penances.

How many Lents? Not nearly enough for my liking. But thankfully, here comes another one to bring us closer to the God Who lived and died for us, so that we could be together with Him forever in Heaven. And you thought only Christmas was for gifts.