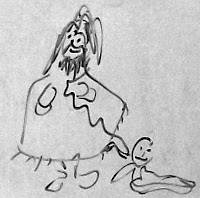 …and zap! Jesus’ power flowed through his body to his cloak to the tassel to the woman…
.
Edited recap of the January 18, 2012 class.

.
This bit by Joyce Donahue motivated me to work Tebowing into Wednesday Night Sunday School: “Hey I gotta question for y’all. Don’t answer, just raise your hand: who knows how to Tebow…y’all come up here. Nobody else knows? That’s OK. You two, when I count to three, do it…1, 2, 3, TEBOW!” And the two sporting boys execute perfect, simultaneous Tebows, rivaling the Master.

“None of y’all know what this is? Oh yeah, that’s the football player who prays all the time! Right, they’re praying. If you’re gonna pray for just a few seconds it’s simpler to get down and up on one knee instead of two. When do we do that in a Catholic Church? When do we Tebow? No…I mean when do we go down on one knee instead of two. Genuflecting! Umm, yes, that’s what we call it. But when do you do it? When you’re about to sit down. Yes. Have any of y’all been to a church that isn’t Catholic? Me…me too. OK, do y’all genuflect in those churches? No. Anybody know why not? ‘Cause they don’t have a tabernacle! Yes, genius, like so…altar…tabernacle.

Hey, what’s a tavern? A bar! Yes, a place to have a beer, but it comes from this word, taberna, which means house in Latin. Our word tabernacle comes from the Latin word tabernaculum, which means little house. So…tell me something. It’s Jesus’ house! Yes, so when Jesus is in his house...we genuflect. Yes. Tell me a day that we don’t genuflect. Christmas! No! Easter! No! Stop guessing like monkeys! Good Friday! Yes, why? Cause Jesus isn’t in his house. So where is he? On the cross. Yes. Usually on Good Friday we kneel to venerate the crucifix. It’s a bit more intense than a genuflection. By the way, what’s that mean: to genuflect? Bow down! Close…pray! Also close…if something is flexible it can...bend! Yes, so if -flect- means bend, then…it means bend your knee! Yes. Genua is Latin for…knee! Yes. The G-N is related to the K-N from before there was English or Latin; “-kn-” and “-gn-” sounds are very close to each other. Yes? Why don’t we say the k? Well, we stopped saying those k’s centuries ago, but we used to say them. Germans still do, they say “k’nee.” That sounds weird. Yes, but it sounds normal to Germans. Historically speaking, people were genuflecting long before Jesus was born…why? For an emperor! Yes, or…a king! Yes, people genuflected before people who had authority over them. We still do that when Jesus is in his little house.”

The lesson plan includes discussing and acting out miracles, many of them intercessory. Some people, including the pagan Centurion (who commands how many men? 100! Yes!) and the pagan Canaanite woman, are ok with miracles-at-a-distance. But Jairus wants Jesus to come to his house, the Paralytic’s friends dropped him through the roof onto Jesus’ head, and the Woman with the Hemorrhage tries to grab Jesus. Maybe they lack the faith of the pagan Roman; but then again, maybe they intuit something important about Jesus’ body. “Yes? What’s intuit? To know something or figure it out without knowing exactly why.” 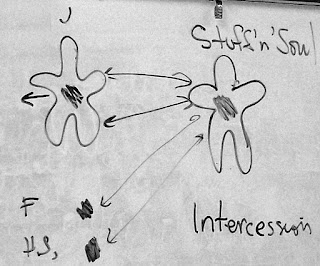 Now tell me what this is…a soul...yes. But let’s say spirit in this case. And this is…another spirit! Yes. So? So what? Well, what’s odd about these spirits? They don’t have bodies. Yes. So? They’re angels! Ooh, great guess honorary son, but no. They’re God! Genius, yes, but what flavors? God the Father and the Holy Spirit! Yes. Do y’all get that? No? Explain it, please. Jesus has a body but they don’t.  Yes, and those three persons make…the Trinity. Yes, exactly so, one God, three Persons.

Now before Jesus, which Person could you have a relationship with? The Father? Yes (arrow). How? By praying & stuff. Yes, spirit-to-spirit. And how does it work with the Holy Spirit? Umm, spirits, too? Yes. But I thought the Holy Spirit was a dove. That’s a good question. The Holy Spirit may appear as a dove but isn’t one. Like angels: did Gabriel appear to Mary? Yes. Are angels made with bodies? No. Right.

Now tell me about people having an encounter with Jesus instead of the Father or Holy Spirit. It would be with both parts. Yes…stuff”n’spirit. Because the people and Jesus all were stuff”n’spirit,  they wanted to have not just a spiritual encounter, but..a physical encounter! (two arrows) Yes, genius! So they naturally wanted Jesus to touch them, or their friends, or their children. They wanted the whole deal. Yes? But the soldier didn’t. Yes. Partly because he was a commander and used to knowing things would be done if he said so. But he still went to talk to Jesus. He saw him and heard him and smelled him even if he didn’t grab a hold of him. Eww, gross! Hey now, people don’t necessarily stink. Y’all know I’m married; am I married to my wife just soul-to-soul? No, both parts! Yes. Well, when I go home tonight she’ll be sitting at her desk, and I’ll come hug her and smell her neck. If she were out of town I couldn’t do that. I’d miss the physical encounter with her and how nice she smells. So people would want to have that full encounter with Jesus…just like I want to have with my wife.

But after Jesus went to Heaven he still left us with ways to have a physical encounter with him through stuff; what are those ways? Sacraments? Yes, genius! Tell us the stuff. Water? Yes in…baptism. Yes, more stuff please. Bread & wine? Yes. How about confession? Is the priest the stuff? Yes, good. So we are spirit’n’stuff; Jesus is also…spirit’n’stuff; yes, and Sacraments are…spirit’n’stuff. Yes, all similar but not exactly the same. We’ll learn more about this stuff business later this year.”

Class finished with a discussion of Jairus’ daughter and the Woman with a Hemorrhage. You may notice that in answering a question on the fly, I conflated the Samaritan woman with the Canaanite woman. I’ll sort that out next week.