I am very pleased to be joining in here at Amazing Catechists to give away a copy of three of my book titles:

Catholic Saints Prayer Book, A Catholic Woman’s Book of Prayers, and Catholic Prayer Book for Mothers, all from Our Sunday Visitor! 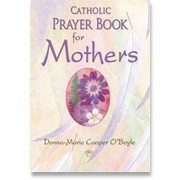 Lisa Mladinich has reviewed my book Catholic Prayer Book for Mothers. She graciously said: “Donna-Marie Cooper O’Boyle’s delightful pocket-sized volume, Catholic Prayer Book for Mothers, is like all her work in that it comes from the depths of her heart. But it is so much more. Yielding her days, moment by moment to God through the example of Our Lady, and guided by the extraordinary teachings of the Catholic Church, Donna-Marie has received along the way the luminous and enduring grace of a mother’s wisdom, which she shares with affection and humility.

I always light up under the influence of this wise and tender friend to women; one who has prayed, suffered and rejoiced with Our Lord through all of life’s varied moments in an attitude of trust. This little book makes me think of a garden, with its smaller beds of ferns and flowers, overflowing with life and beauty. In each chapter, you’ll discover small blossoms of scripture, quotes from popes, saints, and the Catechism, traditional and original prayers and poems, and personal thoughts for meditation.

This compilation is a wonderful gift for every mother or grandmother who needs a reminder that her hidden life of dedication to her children is “an integral part of the means to their salvation,” and that God’s grace is available to her in abundance for their every need. Like the author herself, the Catholic Prayer Book for Mothers is here ‘…to assist you in keeping your heart always lifted up toward Heaven, communicating with the Divine, even as your hands are occupied with household and motherly tasks.’ Highly recommended.”

Have a quick look at this brief book trailer for my upcoming book, Embracing Motherhood due to be released in early January and available at my website: www.donnacooperoboyle.com

Have a beautiful Advent and a very holy and happy Christmas!

Donna-Marie Cooper O’Boyle, noted as one of the top ten most fascinating Catholics in 2009 is a world-renowned author, and journalist, and EWTN-TV host of “Everyday Blessings for Catholic Moms. She is also a Catholic wife and mother of five, a Catechist, and speaker.

She was blessed with a decade-long friendship with Blessed Mother Teresa of Calcutta and passionately encourages others to follow in the footsteps of her blessed friend—caring for the poorest of the poor. Mother Teresa constantly encouraged Donna-Marie to continue writing for mothers, women, and families.

Donna-Marie was invited by the Holy See in 2008 to participate in an International Congress for women at the Vatican to mark the twentieth anniversary of the Apostolic Letter, Mulieris Dignitatem. Her books and writings are centered on faith and family. She has nine books published thus far and several to be released in the near future. 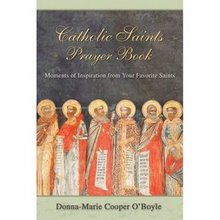 Donna-Marie is a frequent guest on national and international Catholic radio including the “Vatican Insider” and has been profiled many television shows including Faith and Culture on EWTN, and on EWTN’s Bookmark with Doug Keck, “Crossroads Magazine” show.

Her writing can also be seen on the web in columns and websites and magazines and newspapers. She has written for the English edition of L’Osservatore Romano (Vatican newspaper), The National Catholic Register (national), Our Sunday Visitor (national) newspaper, The Catholic Transcript, The News Times, The New Milford Times, Hearth magazine, Canticle magazine, Lay Witness magazine, Faith & Family magazine, CarbLite magazine, on the Web—many areas, including Catholic Exchange, Catholic Online, her column at Catholic Mom.com, Catholic Lane, and a parenting column for Irish Family Press (print edition), a Catholic weekly newspaper published in Ireland and also its online version. Learn more at Donna-Marie’s website: www.donnacooperoboyle.com

Donna-Marie Cooper O’Boyle, noted as one of the top ten most fascinating Catholics in 2009 is a world-renowned author, and journalist, and EWTN-TV host of “Everyday Blessings for Catholic Moms. She is also a Catholic wife and mother of five, a Catechist, and speaker. She was blessed with a decade-long friendship with Blessed Mother Teresa of Calcutta and passionately encourages others to follow in the footsteps of her blessed friend, caring for the poorest of the poor. For more information, visit https://www.donnacooperoboyle.com/