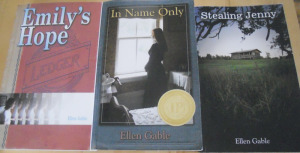 Ellen and her husband, James, have been certified NFP teachers for the Couple to Couple League since 1984 and have worked since 1983 in marriage preparation and chastity education. Ellen currently works as marketing director for Live the Fast. Ellen’s also an award-winning, bestselling author (her books have recently topped 610,00 downloads on Kindle). Her newest book is A Subtle Grace, which just hit #1 in Christian Historical Fiction and Christian Romance. Her other books can be found at her Amazon Author Page. She writes frequently for CCL’s Family Foundations magazine, a columnist for CatholicMom.com, a reviewer for CatholicFiction.net and she and her husband create the “Family Life” cartoons. She and her husband own a small Catholic publishing company called Full Quiver Publishing. Her blog is at https://ellengable.wordpress.com. She lives in Pakenham, Ontario Canada with her husband and sons. Contact her at: info@fullquiverpublishing.com