When I used to teach RCIA and adult ed, I never worried much about engaging people’s imaginations. But it’s a requirement for teaching kids, so I am always on the lookout for anything beyond the classroom that can help me do that: scenes from movies such as Prince of Egypt; excerpts from stories such as A Christmas Carol; newspaper articles; sticks, bones, and rags; and especially fine art. I’ve posted recently about my preference for art that isn’t aimed specifically at kids, but rather art that is the best the world has to offer.

Marriage and children are big topics in Wednesday Sunday School. I give the Bible and the Church every opportunity to teach this valuable life template:

Get married; stay married; have children.

But as often as marriage comes up in my class, I’ve never seen anything on the subject that really grabbed my imagination. At least not until this weekend, when I surfed into yet another piece of art that will work perfectly: Marc Chagall’s Wedding from 1910. 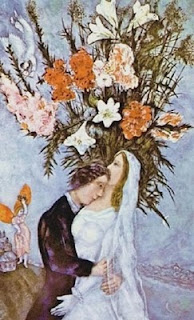 Sweet, isn’t it? Little angels, pretty flowers, an affecting and childlike innocence. We won’t discuss any of that in class unless the kids bring it up. See, that’s looking at the painting as an illustration of marriage; that’s ok, but Chagall isn’t illustrating marriage, he’s painting a portrait of marriage. Whose marriage? My modest amount of research didn’t provide an answer.  That suits me just fine: I can proceed with my own opinion. I think it’s Chagall and his wife Bella, whom he met in 1909. What a pretty thing she was: 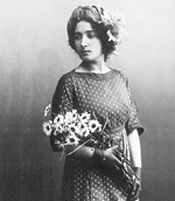 They were engaged in 1910, but not married until 1915: her prosperous parents weren’t keen on Chagall until he showed he could earn a proper living as an artist. But didn’t he paint this Wedding in 1910? Yes: he painted the wedding he longed for, created a portrait of his marriage ahead of time. Does that bride look like Bella, and the man Chagall? I say yes. We may discuss Marc and Bella a bit in class, just to broaden the kids’ horizons, but they aren’t the point of the portrait either. So what is Chagall’s point? Let’s see.

Right off, I don’t believe this is primarily a painting of Marc Chagall and Bella Rosenfeld: rather, Chagall  has made a wedding portrait of Adam and Eve, using himself and Bella as models. Why does he do this? Because he sees his longing to be attached to Bella through the lens of Adam’s longing for, and attachment to, Eve. But why would Chagall necessarily think of Genesis when he thought of marriage? Because when little Moishe Segal was growing up in Vitebsk, Russia, he attended Jewish grade school.

Let’s look at key bits of Genesis Chapter 2: “It is not good that the man should be alone; I will make him a helper fit for him.”…but for the man there was not found a helper fit for him. So the LORD God caused a deep sleep to fall upon the man, and while he slept took one of his ribs and closed up its place with flesh; and the rib which the LORD God had taken from the man he made into a woman and brought her to the man. Then the man said, “This at last is bone of my bones and flesh of my flesh…Therefore a man leaves his father and his mother and clings to his wife, and they become one flesh. And the man and his wife were both naked, and were not ashamed.”

Cling is a critical word. The verb to cling/ to cleave in Hebrew is dabak, דָּבַק. Yes, it means to cling, to adhere, to stay with. But it also means to pursue, to overtake. I like that.

See how Adam holds Eve: he is tender, but forceful: even her arms are caught in his urgent embrace. The couple is not side by side; not arm in arm; not hugging each other. No. He holds, holds onto her, not vice versa. And though she’s caught in his arms, he’s not elated or victorious: he’s profoundly relieved. At last, at last, bone of his bone, he presses Eve close to his left side, where his heart beats.  And he doesn’t look at her, but bends a bit to inhale her scent. I don’t know how to artfully express that, but I well know its drug-like effect.

Eve is nonplussed by Adam’s intensity; surprised even. But to find your rib among a multitude- well, that’s the achievement of a lifetime. And once you have it back, never let her go, as the song says.

Oh yeah, the point. Chagall’s point is that this is what he expects his marriage to be. Not so much because he uniquely loves Bella (although he does), but because every marriage should be like the first one. I’m especially moved because he’s portrayed my wedding & marriage as much as his own, or Adam’s. Isn’t it amazing that in 1910 he understood marriage well enough to say so much about it while yet remaining unmarried himself? Well, yes; but through the winsome Genesis account of how God gave Adam his mate, even the unmarried Chagall knew that a man shouldn’t be alone; a man misses his rib and wants that one-and-only missing rib to be pressed once again against his heart; that his wife is bone of his bone, flesh of his flesh; and that he is impatient to leave his family and cling to her. And of course that they’d be naked, and not ashamed, and make some babies, but the kids don’t need a picture of that.

We already cover all of this in class; but we never had the right image until now.