Regular readers may remember I was in Ravenna, Italy this summer, where I saw some mosaics I wanted to use in this year’s catechism class. Images help children learn, but I like to use fine art rather than something specifically pitched at 11-year-olds. The kids can learn from a “grownup” mosaic as well as they can a cartoon; and fine art is simply a richer experience, spiritually, culturally, aesthetically, you name it.

Next week we’ll be covering Genesis from Cain & Abel through the Sacrifice of Isaac. I’ve made up a 1-page handout for the class showing the mosaics, and a bit of scriptural narration to go with the images.

Genesis 4: “Abel brought of the firstlings of his flock and of their fat portions. And the LORD had regard for Abel and his offering…”

Genesis 14: “And Melchizedek king of Salem brought out bread and wine; he was priest of God Most High.” 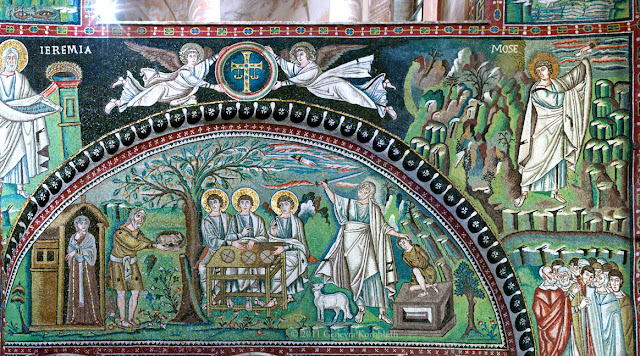 Genesis 18: “Abraham looked, and behold, three men stood in front of him… Then he took curds, and milk, and the calf, and set it before them; and he stood by them under the tree while they ate.
Genesis 22: “Abraham built an altar there, and laid the wood in order, and bound Isaac his son, and laid him on the altar, upon the wood. 10 Then Abraham put forth his hand, and took the knife to slay his son. But the angel of the LORD called to him from heaven, and said, “Abraham, Abraham!” And he said, “Here am I.” He said, “Do not lay your hand on the lad or do anything to him; for now I know that you fear God, seeing you have not withheld your son, your only son, from me.”
These two mosaics flank the altar in San Vitale church in Ravenna, Italy
———————————————————————————————
This is typical of my handouts: one page with big images so the kids can discuss the details, and leftover space filled with supporting verses. Fast and easy. It doesn’t mean much without class discussion, but that’s deliberate: time & effort go into the lesson plan, not the handout. The handout isn’t intended to replace live learning, but to support it. And I want the kids to evangelize their parents. I tell them to show the handout to their parents and explain to them what they learned. All of them don’t do that, but some of them do (I get feedback).
As usual there’ll be some step-by-step Bible reading, questions, answers, picking out relevant information from the mosaics and relating it to the following themes:
Abel: shepherd, innocent victim, altar, red cloak, sacrificing a lamb, resentment; Abel is a type of Christ.
Melchizedek: a priest outranking Abraham, bread and wine, what a priest’s job is, Melchizedek is a type of Christ.
Abel & Melchizedek: God finds both of their offerings acceptable, unlike Cain’s.
Abraham and the 3 visitors (the Hospitality of Abraham): Married love wants to create children; 3 visitors foreshadow the Trinity; a miraculous (but not immaculate) conception; Isaac means Laughter.

All of the above can be taught without pictures; but pictures make the learning so much more effective. Depending on how the discussion goes, I may say a few things about how these Genesis stories connect to Jesus and/ or the Mass. If I don’t, they’ll be reviewed on the fly when we cover the Gospels and the Mass later on.