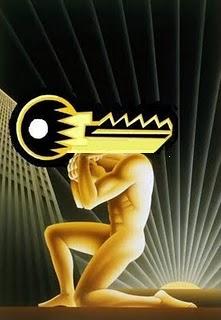 Y’all are already way, way familiar with these two bits:

20 In that day I will call my servant Eliakim the son of Hilkiah, 21 and I will clothe him with your robe, and will bind your girdle on him, and will commit your authority to his hand; and he shall be a father to the inhabitants of Jerusalem and to the house of Judah. 22 And I will place on his shoulder the key of the house of David; he shall open, and none shall shut; and he shall shut, and none shall open.

We act out the Isaiah 22 bit in class. A weak point last year was that the kids didn’t grasp why King Hezekiah doesn’t just hand the key to Eliakim. I put my keys on Eliakim’s shoulder because that’s what it says; but it seems odd. Nobody put keys on someone else’s shoulder.

So this year when we cover Isaiah 22, and Eliakim still has my keys on his shoulder, I expect discussion to continue something like this:

“Eliakim, why didn’t I just hand you my keys like a regular person? No idea…that’s ok. Anybody? Cause he’s shorter than you! Oh my, you are the clever one, but no. Listen to this bit of prophecy from Isaiah Chapter 9 and see if you can figure it out.

6 For to us a child is born, to us a son is given; and the government will be upon his shoulder, and his name will be called “Wonderful Counselor, Mighty God, Everlasting Father, Prince of Peace.”

Who’s this prophecy about? Jesus? Yes, why? Because he’s the Prince of Peace? Yes, good. Why will the government be upon his shoulder? ‘Cause he’s the Prince? Well, yes, but why is it on his shoulder? No guesses…ok, look, when I carry my keys I can do it like so (I take the keys from Eliakim’s shoulder and hold them between two fingers). Can I carry my 20-lb. grandson like keys? No, he’s too heavy. Right, I carry him more like this (I pretend to carry him slung in the crook of my arm). Now if I’m a fireman carrying another grown man out of a burning building, can I tote him like my grandson? No he’s too big! So what do I do? You have to put him over your shoulders! Yes. When someone carries something on his shoulders, what do you know? That he’s carrying a lot of weight! Yes, if you’re carrying all you can bear, the load is on your shoulders. OK Eliakim, I’m going to put my keys back on your shoulder…how do those little keys feel now? Heavy! Yes, that responsibility is a great burden. C’mon, show us how heavy all that responsibility is…that’s it. But isn’t it also a great honor to be trusted with the king’s keys? Yes. OK class, tell me: who bears responsibility for Hezekiah’s kingdom? Hezekiah! No…Eliakim! Yes, Eliakim…how do you know? He got the keys! Yes, and why are they on his shoulder…because keys are heavy? No, ’cause the kingdom is heavy! Yes…is it literally heavy? No…but to do it is hard. Yes, as we said before it’s a heavy responsibility.”

Later on when we get to Matthew 16, we’ll cover this:

“Y’all remember a couple of months ago when I gave Eliakim my keys? Yes. Did I just hand them over? No, you put them on his shoulder. Because...they’re heavy! No…think first, then speak. Because he’s responsible for everything. Yes. So when Jesus says he’s giving his keys to Peter, is that going to be fun for Peter- to have that power? No, it will be hard. Yes, but it’s also a great honor…an honor which carries a heavy responsibility, but also great authority. In fact, back when Eliakim got the keys, Isaiah also said, “…he will become a throne of honor to his father’s house.” That sounds pleasant, doesn’t it? Having a throne, having authority, being the bossman: hey servant, fetch me a pizza. And then Isaiah says, “And they will hang on him the whole weight of his father’s house, the offspring and issue, every small vessel, from the cups to all the flagons.” Yes? What’s a flagon? It’s a kind of pitcher. So how did Eliakim and Peter probably feel about bearing the weight of the keys? Honored? Yes, and…scared? Yes, and…worried? Yes. Would you want them? No. Why? I would be afraid I’d mess up. Yes. But maybe you or Peter would get some help…from…Jesus? Yes. Or the Holy Spirit. The Church knows that even though Peter and his successors, who are…popes…yes, are sinners, God helps them not to teach anything about Himself that isn’t true.”

An aside on lesson plans:

Most of this post is about working the shoulder material into the catchetical year in order to add something I noticed was lacking last time. But part of is about deciding where to add the new material. In this case, I’m planning to use Isaiah 9 in addition to most of Isaiah 22 to discuss Eliakim’s key. Then when we get to Peter’s keys in Matthew, I’ll go back to Isaiah 22 for the bit about the weighty honor.  Because the class runs through the Bible chronologically, my default position is to just cover stuff in order. But sometimes for the sake of future review it’s better to save some early bits for later. In other words, suppose part of an October O.T. lesson has bits A, B, C & D; and I’ll want to review them in February during an N.T. class. Sometimes it’s better to teach A, B & D, but not C. Then in February, new learning about C will be tied to the review of A, B & D. The C bit will then be a bridge between the O.T. material and the N.T. material.

Finally, because I still have last year’s lesson plan outline, it’s easy to see how and where this new information should be included.