My family and I returned home early Sunday morning from a couple of days in Venice, preceded by an Adriatic cruise (the family preceded the cruise with a 10-day Catholic land-tour of Italy), all arranged by My Wife the Travel Agent.

Among the ports we visited was Ravenna, Italy, home to many of Eastern Christendom’s best-preserved mosaics. Like most people who learn Architectural History in college, I was familiar with the churches, baptisteries, and tombs I’d see, and their more well-known mosaics. But I was pleasantly surprised by the catechetical content of less-famous mosaics which I hadn’t seen before.

We first visited San Vitale. With the viewer facing the altar at communion-rail distance (there isn’t a communion rail) the following image is high to the right of the altar: 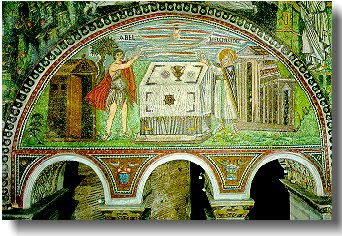 The area under the arch is called a tympanum. On the left is Abel offering up a lamb (Gen 4); on the right, Melchizedek offers bread and wine (Gen. 14). The Hand of God reaches down from Heaven to accept their offerings from the shared altar. I plan to use this image in class this year. Visual details are useful: while I read the stories bit by bit from Genesis, the kids can tell me why Melchizedek’s house and clothes are nicer than Abel’s, and locate the wine on the altar. Check out the close-up: 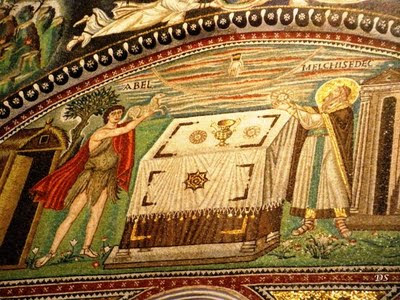 But why is the poor shepherd Abel wearing that red robe? What other Bible figure is often depicted wearing a red robe? Uh-huh. With a little guidance the kids will figure out the significance.

Directly across from Abel and Melchizedek is this mosaic: 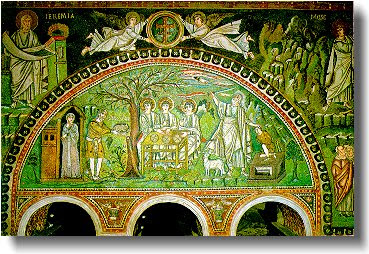 Just fyi, on the upper left is Jeremiah; upper right, Moses. For class I’ll crop that image, so the focus is on the tympanum. The first 2/3 of the image depicts the L’Ospitalità di Abramo, The Hospitality of Abraham, as recounted in Genesis 18:1-15. I outline here how I treated this in class last year with a fresco painting I don’t like as well as this mosaic. The mosaic has lively visual cues from the story that will help the kids listen to the text: the tent on the left, the slaughtered young steer about to be served by Abraham, the shady tree. Who knows, maybe 1400 years ago when that passage was read in San Vitale, parents would point the images out on the walls to their kids.

The last 1/3 of the image shows the Sacrifice of Isaac (Gen. 22). Nice of the artist to show the ram which will be sacrificed instead of Isaac, and also the Hand of God reaching down to interrupt Abraham. By the way, seeing a character appear in different scenes within the same composition is not unusual.

This shot gives some context: 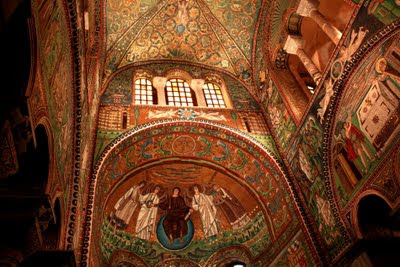 In the center is a young, beardless Christ (not unusual in the East) flanked by two angels. At the extreme left is St. Vitale; at the far right I think is the guy who paid for the church (he’s offering a miniature church to Jesus). To the lower left and right of the high windows are buildings labeled Jerusalem and Bethlehem. I won’t cover this picture in class, but it’s instructive to see how densely-packed the church is with graphic catechetical information.

I already treat these four stories in class as part of an Old Testament lead-up to the Mass. But this pair of mosaics flanking San Vitale’s altar shows the kids that for a very long time these stories have been connected to each other, and to what happens on the altar at every Mass. I can always tell them that; but they’ll learn it better if they can vividly see it for themselves. I expect to hand out 8×5 color copies of the appropriate tympanum as we cover each of the Old Testament stories. At the end of any class that I hand out copies, I take them back up unless any kids want to take their copies home. Nice color copies ain’t cheap, and by taking them up the DRE saves some money; plus it means if kids want to keep the copies they must say so. I believe that requires a bit of commitment on their part not to throw it away when they go home. I know that sometimes kids will take a picture from class to show their parents what they are learning, which is terrific. Having the kids evangelize their parents is a conscious part of my catechesis. So each tympanum may be handed out twice, for a total of four stories, and taken up again in the first few weeks of class. The kids won’t see them again until we cover the Mass months later, when we get to this point in the Eucharistic Prayer:

“Be pleased to look upon these offerings
with a serene and kindly countenance,
and to accept them,
as once you were pleased to accept
the gifts of your servant Abel the just,
the sacrifice of Abraham, our father in faith,
and the offering of your high priest Melchizedek,
a holy sacrifice, a spotless victim.”

I’ll hand out both tympanums this time, and we’ll revew the four stories. Having the pictures will help them remember. I’ll say a bit about San Vitale, and explain where the mosaics are located in the church. Then through a series of questions and answers,  the kids will work out why the artists at San Vitale would have put those images so near the altar, and why 3 of the 4 stories are referred to in the Eucharistic Prayer.