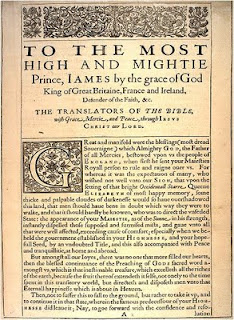 In Wednesday Sunday School virtually everything that is read out loud in class is from the Bible. I use the NAB for most reading (that’s what the kids hear at Mass), but usually check the RSV-CE, Douai-Rheims, and KJV for critical verses: sometimes I just don’t love the way the NAB says things.

As part of lesson planning I frequently do word searches. The best online searchable Bibles IMNSHO are the collated Protestant versions at Bible Gateway (Gateway graciously gives you the option of searching the 7 Deuterocanonical books along with the 66). There are several search options, plus it’s easy to quickly see a given verse, chapter, or the whole Bible in a number of versions and languages (Spanish!). Occasionally I will prefer the 1611 King James Version to the Catholic Bibles I typically use, so my default version at Bible Gateway is the KJV.

Gateway also has the NIV (New International Version) which I understand is one of the most “readable” Protestant Bibles. Occasionally I have a look at the NIV. Sometimes it’s ok with me; other times, wow, it’s not. I mean: if you are reading the Bible to learn or teach your Catholic faith, it will be hard to do if you’re using the NIV, or anything like it. Let’s look at a few examples comparing the KJV to the NIV:

In class we use the New Testament to discuss the early organization of the Church, including offices such as Bishop. The word bishop shows up 6 times in the KJV; zero times in the NIV.

“Place of leadership?” Ya kiddin’, rite? The Greek word here is ἐπισκοπή/ episkopi. At least use the word office. Office? We’ll get to that in a few minutes.

KJV: 1 Timothy 3:2 This is a true saying, if a man desire the office of a bishop, he desireth a good work.
NIV: 1 Timothy 3:2 Here is a trustworthy saying: If anyone sets his heart on being an overseer, he desires a noble task.

Yes, bishop means overseer; but saying overseer eliminates the historical significance of the word episkopos. You may as well say “saver” instead of “savior.” They both mean “one who saves,” right? And at least in the South, overseer already has meant for centuries the Simon Legree types who boss the slaves on a plantation. Nobody down here would want to use that word for anything else because of its pejorative meaning. Now I’m thinking that Southern revanchists might want to take a hint from the NIV and start saying bishop instead of overseer. It sounds so much nicer to say the slaves had bishops rather than overseers.

I love this one. The Greek word bishop just has to go; but the no-less-Greek deacon (diakonos/ servant) gets to stay. Is that because someone thinks it’s ok to have deacons, but not bishops? Well, as Ian Faith might say, “Oh, no, no, no, no, no, no…no, no, not at all. I, I, I just think that the…uh…the NIV is becoming more selective.”

Koinonia translates well as communion; e.g., the koin- root shows up in other Greek words such as koine, which describes the common, spoken Greek of St Paul’s day. Participation and fellowship are not bad words, but they move away from the root meaning of koin- and also strip out the historical continuity and implications of the word communion.

Uh-oh. You know how the Catholic Church accepts the authority of Scripture, Tradition, and the Magisterium. But non-Catholics are ummm, non-fond of the latter two. But the KJV and NIV both use the word tradition to translate paradosis, which means to surrender, give up, hand over. Or at least they do when the traditions are bad. For example, the N.T. speaks of the “traditions of men:”

KJV: Colossians 2:8 Beware lest any man spoil you through philosophy and vain deceit, after the tradition of men, after the rudiments of the world, and not after Christ.
NIV: Colossians 2:8 See to it that no one takes you captive through hollow and deceptive philosophy, which depends on human tradition and the basic principles of this world rather than on Christ.

So where tradition is found in a bad context, both Bibles keep the word. But, you ask, doesn’t Scripture also say good things about tradition? Why yes it does, when it speaks of tradition which is “handed down” by the Church’s authorized teachers, such as St. Paul and the Apostles. But gosh, the NIV won’t say tradition if it’s in a good context, per the examples below:

KJV: 2 Thessalonians 3:6 Now we command you, brethren, in the name of our Lord Jesus Christ, that ye withdraw yourselves from every brother that walketh disorderly, and not after the tradition which he received of us.
NIV: 2 Thessalonians 3:6 In the name of the Lord Jesus Christ, we command you, brothers, to keep away from every brother who is idle and does not live according to the teaching you received from us.

Works are bad or useless:

And where works are good:

KJV: James 2:25 Likewise also was not Rahab the harlot justified by works, when she had received the messengers, and had sent them out another way?
NIV: James 2:25 In the same way, was not even Rahab the prostitute considered righteous for what she did when she gave lodging to the spies and sent them off in a different direction?

KJV: James 2:22 Seest thou how faith wrought with his works, and by works was faith made perfect?
NIV: James 2:22 You see that his faith and his actions were working together, and his faith was made complete by what he did.

That was easy! You just have to apply the rule.

Last one now. Both the N.T. Greek and Old Testament Hebrew have an array of words which the KJV translates as office. In total the KJV says office 46 times. In contrast, the NIV uses office 7 times. Some NT examples:

KJV: Luke 1:8 And it came to pass, that while he executed the priest’s office before God in the order of his course…..
NIV: Luke 1:8 Once when Zechariah’s division was on duty and he was serving as priest before God,

KJV: 1 Timothy 3:10 And let these also first be proved; then let them use the office of a deacon, being found blameless
NIV: 1 Timothy 3:10 They must first be tested; and then if there is nothing against them, let them serve as deacons.

Like translating bishop as overseer, I don’t find these alternate translations to be be less technically accurate than saying office; but if you’re trying to show the Scriptural reasonableness of the Church having permanent, formal offices, as opposed to gauzy “places of leadership,” you’re going to have a problem doing so from the NIV. And the same thing will be true when subjects such as bishops, tradition, communion, and good works are concerned. In the NIV, the positive Biblical support for these (not exclusively) Catholic concepts has been translated right out of the plain text.