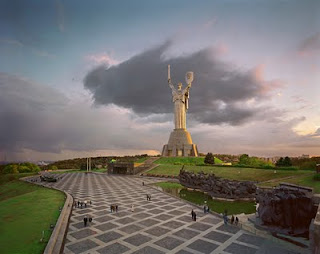 Hey y’all, Lent is over, and last Sunday was Easter. So instead of praying an Act of Contrition for Lent, we have an Easter season prayer, which I will sing because it’s also a hymn to Mary that’s about 900 years old. It tells her to be happy because Jesus isn’t dead anymore:

“O Queen of Heaven, be joyful, alleluia.
For He whom you have humbly borne for us, alleluia.
Has arisen, as He promised, alleluia.
Offer now our Prayer to God, alleluia”

Ok, last week in our Mass class we stopped with the priest saying, “command that these gifts be borne by the hands of your holy Angel to your altar on high in the sight of your divine majesty,” and referred to that great image of the angel going up to heaven in the Holy Tornado. 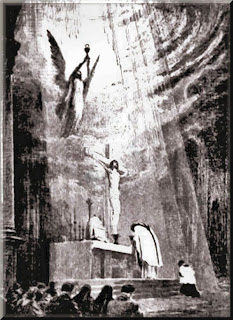 Moving forward in the Mass from there, the priest says, “Remember also, Lord [those] who have gone before us with the sign of faith, and rest in the sleep of peace.” Who are these people? Saints? Yes. And the priest mentions some of them: “graciously grant some share and fellowship with your holy Apostles and Martyrs:” John the Baptist, who y’all know; Stephen, who was the first…? He was stoned to death…the first martyr!  Yes. Matthias, who replaced…the bad apostle…Judas! Yes. Barnabas, who traveled with St. Paul; Ignatius, Alexander, Marcellinus; Peter, the first…pope! Yes. And now a group of women saints: “Felicity, Perpetua, Agatha; Lucy, who was tortured by…putting her eyes out! Yes, and “Agnes, Cecilia, [and] Anastasia.” These saints were all among the first Christian martyrs. And I like Anastasia because her name comes from Anastasis, which is Greek for…Easter! Yes, it means “resurrection.”

And when the priests asks for “fellowship” with the saints, what’s he mean? To be friends with them? Yes, to be part of the Communion of Saints, who are at Mass with us even if we can’t see them.

Tell me, when we think about our sins, do we want God’s justice? No, we want his mercy! Yes, his forgiveness. That’s why we next hear, “admit us, we beseech you, into their company, not weighing our merits, but granting us your pardon…”

During the Eucharistic Prayer we’re kneeling; when it comes to and end, we stand up. When we stand up, what do we pray? C’mon, y’all know this. “At the Savior’s command and formed by divine teaching, we dare to say”…the Our Father! Yes, which comes to us straight out of Jesus’s mouth in the Gospel of Matthew. And y’all know this line: “and forgive us our trespasses, as we forgive those who trespass against us…” Well, right after Jesus finished the prayer, he said, “For if you forgive men their trespasses, your heavenly Father also will forgive you; but if you do not forgive men their trespasses, neither will your Father forgive your trespasses.” (Matt 6:14) So, if we don’t forgive others…God won’t forgive us. Right. I expect to spend quite some time in Purgatory burning my resentments away in order to forgive everyone. So even though y’all are way younger than me, y’all may beat me to Heaven, even if I die first as expected. When you zoom past me, say, “Bye, Stratopops, I’ll pray for ya!”

Now we get to my favorite part of the Mass. First we say, “Lamb of God, you take away the sins of the world, have mercy on us” how many times? Three! Yes; and who are we quoting? John the Baptist! Yes, and we kneel again. Then the priest holds the Body up, which looks like…bread, yes, and says: “Behold the Lamb of God, behold him who takes away the sins of the world.” And who first said that? John the Baptist. Yes; about whom? Jesus.Yes, when? When Jesus came to be baptized. Yes; where? In the Jordan River. Yes, good. This reminds us that Jesus is just as physically present at Mass as he was when John spoke those words at the Jordan River. It’s the Lamb of God, it’s Jesus. And what’s the deal with the Passover Lamb? You have to eat it! Right. By the way, what did John eat in the desert? Bugs! Yes, tasty when dipped in honey…right, girls? Ewww! Uh-huh…boys? Cool! Yep.

Then the priest quotes an Angel in Revelations: “Blessed are those called to the supper of the Lamb.” This reminds us we’re about to share in the Wedding Feast. Let’s look at where this comes from in Revelations, which we already know says a lot about the Heavenly Worship that connects to Mass on Earth. But first let’s read a bit from Isaiah that you heard earlier this year: “On this mountain the LORD of hosts will provide for all peoples a feast of rich food and choice wines; juicy, rich food and pure, choice wines. On this mountain he will destroy the veil that veils all peoples, the web that is woven over all nations; he will destroy death forever. The Lord GOD will wipe away the tears from all faces…” Tell me, is Isaiah describing a snack? No, a feast! Yes, and all peoples are there, not just the Chosen People. And there’s no death or tears, so it must be…in Heaven! Yes.

Revelations adds to Isaiah’s prophecy: “Then I heard what seemed to be the voice of a great multitude, like the sound of many waters and like the sound of mighty thunderpeals, crying, “Hallelujah! For the Lord our God the Almighty reigns. Let us rejoice and exult and give him the glory, for the marriage of the Lamb has come, and his Bride has made herself ready; it was granted her to be clothed with fine linen, bright and pure.” And the Lamb is…Jesus, yes. And the Bride is…the Church, yes, which is all the nice buildings? No, it’s us!  Yes; and we’ll all live in the Holy City, the…New…Jerusalem! Yes.

So Jesus marries the Church…why? Because he loves Her! Yes. So much that He died for Her. And after a wedding, there’s…a reception! Yes! So it’s a happy feast, but serious, too. And an angel said, “Blessed are those who are invited to the marriage supper of the Lamb…On his robe…he has a name inscribed, King of Kings and Lord of Lords… Then I saw an angel standing in the sun, and with a loud voice he called…”Come, gather for the great supper of God…” So when we eat the feast on Earth…they’re eating the feast in heaven?  Yes.

When I was about your age there was a rock band called Genesis. They wrote a song about the Book of Revelations, which is clever: Genesis is the first book in the Bible, and Revelations is…the last one. Yes. The song is called “Supper’s Ready.” Is it about eating leftover pork and beans around the kitchen table? No it’s about the Wedding Feast! Yes! Listen to the last few lines of the song, which ties together all the stuff you’ve learned about Revelations:

“There’s an angel standing in the sun,
And he’s crying with a loud voice:
This is the supper of the Mighty One.
The Lord of Lords, King of Kings,
Has returned to lead His children home,
To take them to the New Jerusalem.”

So when the priest says, “Blessed are those called to the supper of the Lamb,” use your imaginations.

And then we respond to the priest…you know it: “Lord, I am not worthy that you should enter under my roof…but only say the word and my soul shall be healed! Yes. And who said it first? The guy who wanted his servant healed… Yes…who was “this guy”….the popsicle man? No, a soldier. An Imperial Stormtrooper? Ha, no a Roman soldier. Yes, who commanded a hundred men…a centurion! Yes; and he was a pagan; he believed in made-up gods.

I really like the centurion. I always have to pray for faith before Communion because it looks like plain-old flat, dry bread to me. I struggle with doubt even while I believe. But I’m reminded of the faith of the centurion. He believed Jesus could miraculously heal his servant without needing to visit him; and even though he was a Roman officer, the centurion was so humble that he didn’t feel worthy to have Jesus come to his house. If a pagan can have such faith and humility then it’s not beyond my reach.
This is how the Church uses the Bible to prepare us to receive Jesus at Mass. But you have to know what the verses mean, and think about them, for it to matter. Think about John and Jesus at the Jordan, the Wedding Feast, and the believing Roman officer, and why the stories are put together right before Communion.

What’s next? We go up for communion. Yes, and do we go and grab a fistful of communion hosts? No, the priest gives us one!  Yes, just like when Jesus multplied the loaves & fishes: the people didn’t take the miracle food: the apostles distributed it to them. And when we eat the host, we eat…the Lamb! Yes. And we eat…Jesus! Yes. And we eat…no more guesses? We eat God; we’re God-eaters. Why is that good: to eat God? ‘Cause God is good? Yes, like eating broccoli, God is good for you, but more than that…imagine I’m a young hunter in a primitive tribe. If I kill a lion, what part of the lion would I especially want to eat? His toes? His nose?…What was the matter with the lion in the Wizard of Oz? He didn’t have any courage! Yes, which a lion is supposed to have. So what part of a lion would a hunter want to eat? Umm…his heart? Yes, what would he hope to gain from that? To get the lion’s courage? Yes, and maybe his fearsomeness, strength, speed, and hunting skill. People have believed by eating the heart of an enemy or an animal they could gain their power. Does that really work? No. Right. But with communion it’s different: what do we get spiritually by eating God? His goodness? Yes, his holiness. Have you ever heard the saying “you are what you eat”? Yes. Well, when you eat Jesus you become more like Him, more holy. And remember the day after the Loaves and Fishes, Jesus said “Truly, truly, I say to you, unless you eat the flesh of the Son of Man and drink his blood, you have no life in you;” so you’re doing what Jesus expects you to do- truly, truly.

And after you receive communion, how long is Jesus physically in you? Until your stomach digests, umm, the communion? Yes, for about 15 minutes. So when you get back to your pew, don’t daydream: pray while Jesus is in you. I usually thank God for making this little miracle of the Body’n’Blood available to me, but you can pray however you like.