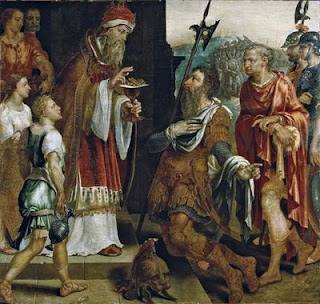 Remember from last week that Jesus had come to Jerusalem a few days before Passover. Now it’s Thursday evening and Jesus wants to have dinner with his friends the apostles. “Now the feast of Unleavened Bread drew near, which is called the Passover. And the chief priests and the scribes were seeking how to put him to death …Then came the day of Unleavened Bread, on which the passover lamb had to be sacrificed. The disciples came to Jesus, saying, “Where will you have us prepare for you to eat the Passover?” He said, “Go into the city to a certain one, and say to him, ‘The Teacher says, My time is at hand; I will keep the Passover at your house with my disciples.” And the disciples did as Jesus had directed them, and they prepared the Passover.  When it was evening, he sat at table with the twelve disciples.”    Tell me please, at the first Passover, what did people eat? A lamb. Yes, and…umm, some bread? Yes, what’s called unleavened bread. Does anyone know what leavening is? No? How about yeast? No? Yeast or leavening is what makes bread fluffy. If you don’t put yeast in bread dough, you get very flat bread. But you can eat sooner, because it can take more than 2 hours for leavened dough to rise and fluff up. At the first Passover, Moses told the Israelites to make unleavened bread and eat quickly, so that when Pharaoh decided to let them leave Egypt, they’d be ready to go. Tell me what pita bread is. It’s flat round bread. Yes, it has just a little yeast and it doesn’t rise for very long before it’s baked. Can anybody think of some other round flat bread? No? How about at Mass? Oh, communion bread!  Yes; it’s unleavened bread, too.

So what do you expect Jesus and the apostles to eat at this dinner? Lamb and bread! Yes, unleavened bread. “Now as they were eating, Jesus took bread, and blessed, and broke it, and gave it to the disciples….” There’s the bread. And Jesus said, “This is my body which is given up for you.” What? Why would Jesus say the bread was his body? So we would have Communion? Yes. But right then the apostles didn’t know that. Remember after Jesus fed the crowds and they wanted more miracle food the next day he said some strange things that upset people…about eating weird stuff…drinking weird stuff…oh, eat my flesh and drink my blood! Yes! Nobody understood Jesus; how could anybody eat Jesus? But then at the Last Supper he says the bread is his body. Would the apostles know how eat Jesus now? Yes, they’d eat the bread! Yes, the bread he turned into his body. Then he said, “Do this in remembrance of me.” What did Jesus just do?  Change the bread?  Yes, into...his body.  Yes.  So what should they do to remember Jesus?  Change the bread?  Yes.  How can they do that?  Jesus would work the miracle through them; they would have his authority. When do we still remember this?  At Mass.  Yes.  And listen again: “This is my body which is given up for you.” What’s Jesus mean that his body is given up for them?  If say, soldiers give up, what happens?  They surrender.  Yes. Is Jesus going to surrender himself to anybody soon?  The Roman soldiers?  Yes; and what will happen to Jesus?  He’ll be crucified.  Yes, he’ll be sacrificed for our sins.  So when Jesus says his body is given up for them he’s making a little prophecy, because nobody’s arrested him just yet.  And the apostles don’t know why he’d give his body up for them anyway.  But we know he’ll be sacrificed.  So, did Jesus sacrifice himself?  Yes.  Oh, he killed himself at the Last Supper?  Ha, no! Right; who did kill Jesus?  The soldiers.  Yes.  Jesus offered himself as a sacrifice at the Last Supper, but didn’t do the actual sacrificing, the killing.  That happened the next day, which would be…Good Friday?  Yes.  Why do we say it’s Good?  Because it was good for us.

“And he took a cup, and when he had given thanks he gave it to them, saying, “Drink of it, all of you; for this is my blood of the new covenant, which is shed for you.”  Y’all and the apostles have already figured out how to eat Jesus’s flesh; how will they drink his blood? By drinking the wine?  Yes, by drinking the wine Jesus changed into…blood. Yes.  Do y’all think at the Last Supper Jesus’s body and blood looked like a hunk of meat and a cup of blood?  No it just looked like bread and wine.  Yes; the apostles still needed faith, just like we do on Sundays.

Now Jesus and his friends were observing Passover, which began with Moses in Egypt; what have they eaten so far?  Bread?  Yes, anything else?  Well they drank some wine.  Yes; what are they supposed to eat at a Passover dinner?  A Lamb!  Yes, sacrificing and eating lambs were signs of the Covenant God made with the Israelites.  Tell me about the sign of the lamb’s blood at the first Passover.  They splashed it on their houses!  Yes.  But Jesus says drinking his blood, not splashing it, is the sign of a new covenant.  And right about now the apostles are thinking: what new covenant?  Isn’t this a Passover meal like people have eaten for centuries?  But maybe the apostles remember one of Jeremiah’s prophecies that we looked at a couple of months ago: “Behold, the days are coming, says the LORD, when I will make a new covenant with the house of Israel and the house of Judah, not like the covenant which I made with their fathers when I took them by the hand to bring them out of the land of Egypt, my covenant which they broke, though I was their husband, says the LORD….”  See how important marriage is?  “I will put my law within them, and I will write it upon their hearts; and I will be their God, and they shall be my people.”  It’s like a romance between God and his people.  Do my wife and I have a bunch of rules on paper?  No.  Why not?  Because if you love somebody you don’t need rules.  Yes.  Boys never answer that question, but the girls always get it right.  Boys, pay attention to what the girls say.  Anyway, I imagine the apostles thinking, “Wow, is Jesus talking about that new covenant that Jeremiah prophesied?  I wonder how that’s gonna work?”  Somebody tell me how it’s gonna work.  No takers…what do we expect the apostles to eat that they haven’t eaten?  A lamb.  Yes.  Tell me what John the Baptist called Jesus…Jesus was coming to be baptized…behold the Banana of God…Behold the Lamb of God! Yes, who takes away…the sins of the world. There ya go! So if Jesus is a Lamb, what kind of Lamb…a Christmas Lamb….Little Bo Peep’s Lamb…a Passover Lamb! Yes. How are the Apostles going to eat this Lamb? What’s the bread? Jesus. What’s the Lamb? Jesus. So if you eat the bread you…eat the Lamb!  Yes.  This is a new covenant meal; but it’s like the old one, too.

Now who was it that made that Passover covenant with God?  Moses.  Yes.  Moses was a very big deal for Jews: he got their ancestors out of Egypt, brought them the 10 Commandments, set up the Ark and Meeting Tent, got them to the Promised Land. So why would anybody dump that covenant and listen to Jesus talk about a new covenant? ’cause Jeremiah said there’d be a new one? Ooh, good guess, but Jeremiah isn’t as big a deal as Moses. He doesn’t outrank Moses.

Now tell me yet again what they have at this Final Din-Din? The Last Supper. Yes…what did they have? Bread and wine. Yes. And thinking way back this year, y’all may remember this guy [on the board] M-e-l-c-h-i-z…Melchizedek! Yes. Tell me. He was a priest? Yes. A king and a priest. What did Melchizedek bring out to Abraham…chips and dip? Umm, bread and wine? Yes. We don’t know exactly how Melchizedek offered up the bread and wine, but Genesis said he was a priest. And Abraham gave him a tenth of the stuff he had just won in a battle. Sort of like the way we give money on Sunday to support the Church. So if Melchizedek blesses Abraham, and then Abraham makes an offering to Melchizedek, who ranks higher? Melchizedek? Yes, why? Well…Abraham had to give him stuff. Yes. And because Melchizedek outranks Abraham, he also outranks Abraham’s descendants, like Isaac and Moses. So when Jesus offers bread and wine like Melchizedek, he’s showing that his new covenant outranks Moses’ covenant.

When Jesus offered the same things that Melchizedek did, I bet the apostles were thinking, “is this like Melchizedek?”  And then “does it matter?” because they didn’t figure things out right away, and Jesus had given them a lot to think about.

After supper was over did they go out bowling?  They went to pray!  Yes, in…a…bowling alley?  Was it the Garden of Eden?  No, good guess; another Garden, the Garden of Gethsemane.  But time’s up, we’ll start here next week.

Wow, y’all are getting good. Class over!