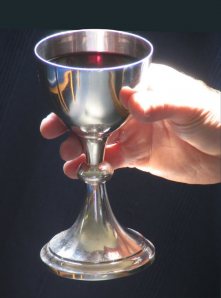 The day after Jesus and the apostles crossed over the Sea of Galilee, the crowd couldn’t figure out where Jesus was, since the apostles had taken the only boat. John’s gospel says they had to walk along the shore to find some more boats, and “they themselves got into the boats and went to Capernaum, seeking Jesus. When they found him on the other side of the sea, they said to him, “Rabbi, when did you come here?” Jesus answered them, “Truly, truly, I say to you, you seek me, not because you saw signs, but because you ate your fill of the loaves.” So why does everyone chase after Jesus? ‘Cause they want another miracle? Yes, I think so; but Jesus isn’t going to give them one. Instead he’s going to take advantage of their excitement to do some teaching. Knowing they’re still fired up about the free food, Jesus says, “Do not labor for the food which perishes, but for the food which endures to eternal life, which the Son of Man will give to you…” And the crowd thinks, ummm…ok! They have no idea what he’s talking about yet, but they have miracle food on their minds, and they remember a very old food miracle…in the desert…40 years…Oh, manna! Yes! They say, “Our fathers ate the manna in the wilderness; as it is written, ‘He gave them bread from heaven to eat.'” Now that’d be a deal: 40 years of free food, courtesy of Jesus. “What sign can you do, that we may see and believe in you? What can you do?” And Jesus says “my Father gives you the true bread from heaven. For the bread of God is that which comes down from heaven and gives life to the world. So they said to him, “Sir, give us this bread always,” as in ok, fine, whatever, just give us the miracle bread already.

But Jesus said to them, “I am the bread of life; he who comes to me shall not hunger, and he who believes in me shall never thirst.” Enough prophet-talk, please…now, about the bread?  “The Jews then murmured at him, because he said, “I am the bread which came down from heaven.” They said, “Is not this Jesus, the son of Joseph, whose father and mother we know? How does he now say, ‘I have come down from heaven’?” Jesus is puttin’ on airs. Now “murmur” is when people grumble and complain to each other about someone else. The Israelites murmured, griped, about Moses before the manna miracle, and now they’re griping about a food miracle again.

But Jesus goes on: “I am the bread of life. Your fathers ate the manna in the wilderness, and they died. This is the bread which comes down from heaven, that a man may eat of it and not die.” What? What bread? I don’t see any bread!  “I am the living bread which came down from heaven; if any one eats of this bread, he will live for ever; and the bread which I shall give for the life of the world is my flesh.”  It gets worse by the minute! Now Jesus expects people to eat him like bread? They…are…getting…aggravated! Yes! “The Jews then argued among themselves, saying, “How can this man give us his flesh to eat?” Now, when someone in the Bible says something more than once, they’re emphasizing how important it is. Jesus has just said that they must eat heavenly bread, which if it’s his flesh means…they have to eat Jesus? Yes. Now y’all count out loud each time Jesus says that; he’s said it once already. So Jesus said to them, “Truly, truly, I say to you, unless you eat the flesh of the Son of man [two!] and drink his blood, you have no life in you”  More aggravation: now they have to eat his flesh and…drink his blood? Yes. Girls, how about it? Ewww, gross!  “he who eats my flesh [three!] and drinks my blood has eternal life, and I will raise him up at the last day.” Now many Christians believe that Jesus was speaking symbolically; nobody had to literally chew him up and swallow him. But then Jesus says, “For my flesh is true food, and my blood is true drink,” so we know he’s not meaning it symbolically. Then, “He who eats my flesh and drinks my blood [four!] abides in me, and I in him.” What’s abide mean? To live? Yes..abide means not just to be alive, but to dwell, like in a house, an abode. So if Jesus says we’ll abide in him and he in us, what’s he mean? Umm…that we live in each other’s house? Yes, that each one of us dwells in Jesus; and Jesus dwells in us. He’ll be at home in us. “As the living Father sent me, and I live because of the Father, so he who eats me [five!] will live because of me. This is the bread which came down from heaven, not such as the fathers ate and died; he who eats this bread [six!] will live for ever.” Living forever- what’s that about? Is everyone confused yet?

I don’t think anything else in the Bible was said six times in a row, so we can be sure Jesus is as serious as cancer about eating his flesh and drinking his blood. At this point almost everyone is…aggravated! Yes. And offended. Disgusted, even. “Many of his disciples, when they heard it, said, “This is a hard saying; who can listen to it? After this many of his disciples drew back and no longer went about with him.” This is the first time the Gospels say Jesus lost followers. I probably would have left too. Eating people and drinking blood; it’s too awful even to hear about.

But not everyone left: “Jesus said to the twelve, “Do you also wish to go away?” Go on, take off if it’s too tough for ya. Guess who answers this question? Peter? Yes! “Peter answered him, “Lord, to whom shall we go? You have the words of eternal life.” I like Peter…does he understand all this cannibal talk? No? Right, he’s as disturbed as anyone else. He doesn’t understand Jesus, but he has faith in Jesus even if he doesn’t understand.

Somebody tell me though where Jesus is bread and people eat his flesh & drink his blood. At Mass! Yes, we know how this all turns out. But on that day, and for another couple of years, the apostles did not know how it would turn out, did not know how what Jesus said could possibly be true. But they had…faith! Yes.

A few days later Jesus asked his disciples, “Who do men say that the Son of man is?” Son of Man is an Old Testament way that Jesus refers to himself.  And they said, “Some say John the Baptist, others say Elijah, and others Jeremiah or one of the prophets.” Everybody’s got an opinion about Jesus: he raised the dead and performed food miracles like Elijah, baptized like John, and aggravated the scribes and Temple staff like Jeremiah.  “He said to them, “But who do you say that I am?” Who’s gonna answer this? Peter! Yes, as usual the Gospels show Peter is the #1 apostle.  “Simon Peter replied, “You are the Christ, the Son of the living God.” Tell me, what’s the Hebrew word for Christ? Anointed! Yes, in English, good; what’s the Hebrew? Messiah! Yes, so Peter is saying Jesus is…the Messiah? Yes the one all the Jews have been waiting for. “And Jesus answered him, “Blessed are you, Simon Bar-Jonah! For flesh and blood has not revealed this to you, but my Father who is in heaven.” Notice Jesus doesn’t call him Peter. And Peter didn’t figure this out on his own like a genius, but what? God told him! Yes; God is giving Peter some special guidance that he isn’t giving the other 11. Tell me what Jesus says next. Thou art Peter…and upon this rock I build my church!  Yes! At this moment Jesus changes Simon’s name to Peter, which means...rock. Right. Do we ever say, “Peter broke the window with a peter?” What? Do we say, “I stubbed my toe on a peter”? Ha! We say rock. Right. We might also say stone. ‘Peter’ is just a name to us in English. But let’s see… ¿Quién aquí habla Español? Who speaks Spanish? Me! OK m’ija, digame, cómo se llama Peter en Español? How do we say Peter in Spanish? Pedro. Yes…who already knew Pedro is Spanish for Peter? Almost everybody, good. [I write Peter and Pedro on the board] Hija, when Jesus changes Simon’s name to Pedro, how does he say ‘rock’? Roca. Oops, sorry, how does he say ‘stone’? Oh…piedra! He says “piedra”. Yes, ‘piedra’ [piedra goes on the board beside Pedro]. Y’all see, it’s more clear in Spanish that Peter is the Rock, the Stone, the words are almost the same. And by the way, how do the French say Peter? Pierre? Yes, Pierre, which is also exactly how they say stone [Pierre goes on the board under Peter, Pedro, and piedra]. It’s perfectly clear to the French that Peter is the Stone. In French you can say, “Pierre broke the window with a pierre.” And at the port in Charleston there are piers; what do think they’re made of? Stone? Yes, and concrete too, but you see where the word comes from.