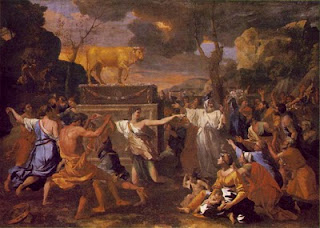 So the Israelites were thrown out of Egypt. Pharaoh didn’t just say, ok y’all can leave, he said get out! Why was he so angry? No guesses? He wasn’t just Pharaoh, but a father. Oh, because his son was killed! Yes, his firstborn. And the Israelites had prepared to leave, so within the day, they were gone. The book in the Bible we’re reading from is called Exodus, which is Greek for departure, or exit. Even though this Old Testament book was written in…Hebrew, the name is Greek. Why is it called Exodus? Because the people were leaving Egypt. Yes.

And by the time they got to the Red Sea, (I draw a quick map of the Nile, the Red Sea, Sinai & the Mediterranean coast) Pharaoh was having second thoughts: “What is this we have done, that we have let Israel go from serving us?” So he made ready his chariot and took his army with him, and took six hundred picked chariots and all the other chariots of Egypt with officers over all of them. And the LORD hardened the heart of Pharaoh king of Egypt and he pursued the people of Israel as they went forth defiantly.”

And when the people saw Pharaoh’s army coming, they started complaining to Moses:  “What have you done to us, in bringing us out of Egypt? Is not this what we said to you in Egypt, ‘Let us alone and let us serve the Egyptians? For it would have been better for us to serve the Egyptians than to die in the wilderness.” Now I know what Moses is thinking: stop WHINING! But God tells Moses:  “Lift up your rod, and stretch out your hand over the sea and divide it, that the people of Israel may go on dry ground through the sea” (I do this with my rod). What happpens? The water splits apart! It does! Would it have parted if Moses hadn’t used his rod? No! If Moses had prayed real hard? No!  Right. Moses had to actively, physically cooperate with God…Moses’ way? No, God’s way! Right. Once again, God’s power goes through something physical, a part of his creation; in this case the rod, the stick. Tell me the rest. They cross over and the soldiers chase them but the water comes back and they drown. Yes, Good. (Ex 14)

Now the people of Israel are heading back to Canaan, the land God gave to…Abraham, yes, their forefather. But they wander around for a long time, which the Bible says is…40 days! That’s not so long. 40 years! There you go. Well, within a month or so of leaving Egypt, they ran out of food: “the people of Israel grumbled against Moses and Aaron in the wilderness, and said to them, “Would that we had died by the hand of the LORD in the land of Egypt, when we sat by the fleshpots and ate bread to the full; for you have brought us out into this wilderness to kill this whole assembly with hunger.” What’s Moses thinking right now? Stop…whining!  Yes. But God told Moses: “Behold, I will rain bread from heaven for you; and the people shall go out and gather a day’s portion every day…” What’s that bread called? Manna? Yes, manna. Question: if God didn’t want the people to be hungry, couldn’t he just think, “they shall not be hungry,” and have that work? Well, God can do anything. Yes…so why did he go to the trouble of putting miracle bread on the ground every morning? So they would know where it came from? Yes, God wanted them to believe not just spiritually, but…physically! Yes, ’cause we’re a…body’n’soul! Yes, and they had to cooperate with God: pick up the bread and chew it and eat it. And “the taste of it was like wafers made with honey”…sounds pretty good!

But if they ran short of food in the wilderness you can bet they also ran short of…water!  Yes.  Exodus chapter 17 says: “…there was no water for the people to drink.  Therefore the people found fault with Moses, and said, “Give us water to drink.” I love that: it’s all Moses’ fault! Stop…whining!  Yes! And Moses said to them, “Why do you find fault with me? Why do you put the LORD to the test?” But the people thirsted there for water, and the people grumbled against Moses, and said, “Why did you bring us up out of Egypt, to kill us and our children and our cattle with thirst?” Waah, waah, like spoiled brats. “So Moses cried to the LORD, “What shall I do with this people? They are almost ready to stone me.” And the LORD said to Moses, “Pass on before the people, taking with you some of the elders of Israel; and take in your hand the rod with which you struck the Nile, and go. Behold, I will stand before you there on the rock at Horeb; and you shall strike the rock, and water shall come out of it, that the people may drink.” And Moses did so, in the sight of the elders of Israel.” And so? Water came out!  Yes. And why did the elders have to watch? So they could tell the people that Moses did it. Yes. So they couldn’t say it just happened by itself.

Suppose Moses didn’t do the rod thing, but say, slapped the rock? No water! Yes…trick question: is the rod magic? Umm…yes…no! No! Right; think about TV. If someone is funny on TV, do you think, “Wow, the TV sure is funny?” Ha, that’s silly! Oh yeah, why? Because the people are funny, not the TV. Right. The TV is just a screen that lets you see and hear the comedian. We call the TV a medium. A medium is something in the middle, like a medium-sized shirt. On one side is the comedian; on the other side is…the people watching the TV?  Yes, so between the audience and the comedian is…the TV!  Yes, it’s the medium, it just carries the information. Think about a lightbulb and a power station, what’s the medium there? Umm…wires?  Yes, the wire transmits…electricity?  Yes, power. When Isaac blessed Jacob, what was the medium? His hands!  Yes. Sometimes we talk about the news media, which means magazines, newspapers, the net, radio, TV. If there is more than one medium, we say media. God uses Moses’ rod as a medium, and this year we’ll see more examples of God using physical things, stuff, as media to transmit his power and grace.

So. Once the Israelites stopped whining about being hungry and thirsty, they stopped for a while at the bottom of Mount Sinai, which nowadays is in Egypt. Moses went up to the top to visit with God…for a long time but not 40 years, which is too long…40 days!  Yes; and why on the mountaintop? OK, where is God usually? In heaven? Yes, which is under the ground? No, up in the sky! So then? Oh, the top is closer to God! Yes.

Apparently the Israelites got bored of twiddling their thumbs for 40 days, which reminds me of a saying: “Idle hands are the Devil’s playground.” Exodus 32 says:  “When the people saw that Moses delayed to come down from the mountain, the people gathered themselves together to Aaron, and said to him, “Come, make us gods, who shall go before us; as for this Moses, the man who brought us up out of the land of Egypt, we do not know what has become of him.” And Aaron said to them, “Take off the rings of gold which are in the ears of your wives, your sons, and your daughters, and bring them to me.”  So all the people took off the rings of gold which were in their ears, and brought them to Aaron. And he received the gold at their hand, and fashioned it with a graving tool, and made a molten calf; and they said, “These are your gods, O Israel, who brought you up out of the land of Egypt!” Oh dear: does God the Father have a body? No. Is he a calf? Ha, no! But Egyptians worshiped make-believe gods, what sort of bodies did they have? One was a bird. Yes, Thoth had a bird-head…another? Umm…a crocodile? Yes; Egyptians had all sorts of animal-body gods. So the Israelites, having picked up some bad habits in Egypt,  decided to make up an animal for God.

After the calf was made, Aaron “built an altar before it; and Aaron made a proclamation and said, “Tomorrow shall be a feast to the LORD.” And they rose up early on the morrow, and offered burnt offerings and brought peace offerings; and the people sat down to eat and drink, and rose up to play.” Uh-oh, like the Devil’s…playground! Yes! God saw them, and was angry that they would treat him like some bogus animal-god. He told Moses he would wipe them out and start over, but Moses pleaded with God not to. “You promised they would have the land of their forefathers, Abraham, Isaac, and Israel, give them another chance.” We would say that Moses interceded for the people. So God agreed not to kill them. As Moses came down the mountain he saw the calf, and the people drunk, running wild, and participating in adult misbehavior. What’s adult misbehavior? Ask your parents. So Moses was angry, and threw something down, which was…the Ten Commandments!  Yes, which were written on…two stone tablets! Yes, they were shattered.

Next week we’ll see how God and Moses dealt with all this idol-worship and sinning.