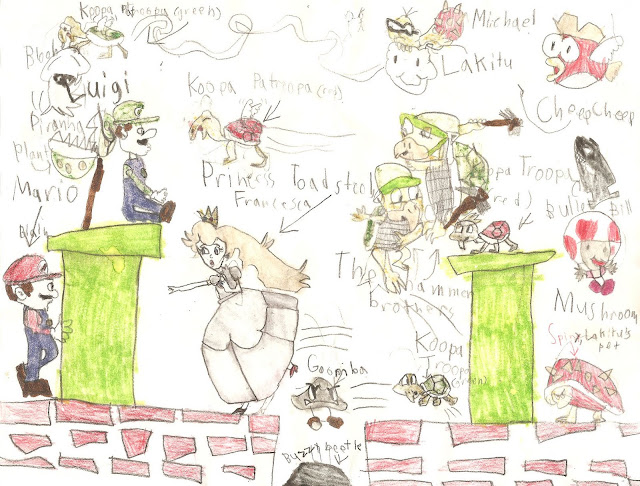 This was drawn by two of my kids, Michael and Francesca. I think they were about 12 and 9 years old, but hey, tempus fugit. It’s a little window into the mind of kids who are about the age of the young’uns I teach in 6th Grade Wednesday Sunday School ™.  This and other pics I have around me at work are a constant reminder of what 6th graders are capable of, and how class has to be structured to maximize their learning.

Right off, what does this drawing tell me about its young artists?

I mention their imaginations first, because I believe if you can charge your students’ imaginations, the rest will follow. I’m reminded now that this wasn’t true of the adults I used to teach in RCIA: I had to stimulate their intellects. The information both groups learn is basically the same: the Church, the Bible, Sacraments, the hierarchy; but the tactics are way different.

“Catechize” comes from the Greek word catechein, to re-sound, and is related to “echo,” itself a re-sounding. Built into the meaning of catechizing is its spoken nature. For most of human history, oral catechesis  has been the norm. It’s too bad that when we adults think “catechism” (κατηχισμός), we think of a thick, dry reference book, instead of the excitement of faith taught orally by one living person to another.

So for starters, I usually don’t read more than a sentence or two at a time from any source without asking the kids a question or making an observation. And the questions can’t be open-ended, or I won’t get the answers I need to maintain the momentum of the discussion. Plus if the kids can be part of story that’s good too. The Healing of the Paralytic is a great example with many themes (see my prior post). I used it in RCIA years ago and use it now in 6th grade, but differently, imaginatively. Like so:

“Hey, I need two sturdy volunteers, you and you get up here, I volunteered you. OK, now daughter, you next. Lie down over there on the floor. What? Lie down , it’s carpet, it’s clean. Don’t be fastidious. What’s fastidious? It means fussy. Lie down. Why? You’re paralyzed, all you can do is lie down, stop arguing with Jesus. You aren’t Jesus! That’s right, but I’m playing Jesus right now. Hey y’all, what is this story we’re about to do? When Jesus heals the paralyzed man!  That’s right! So you’re the paralyzed man, lie down. But I’m a girl!  Yes I know…you’re light so these two friends of yours can pick you up. C’mon y’all, why do they pick him up? To put him through the roof! Yes. OK you two, get ready to pick up your friend…don’t pick him up yet! You’re still outside the house where Jesus is. Paralyzed man, is Jesus a miracle worker? Yes. Why don’t your friends just stand out here and pray for Jesus to fix you? Umm…I don’t know. That’s OK…friends, why do you think you have to go through the roof? Cause it’s crowded? Yes. Let me ask it this way: why do y’all have to get your friend right in front of Jesus? If Jesus is God, he must already know you’re out here, right? Yes. In fact, why didn’t you just stay home and pray instead of toting your poor friend across town in the hot sun? Anybody in the crowd? No guesses…it’s a tough question. Let’s see what the Bible says: “And they came, bringing to him a paralytic. And when they could not get near him because of the crowd, they removed the roof above him, and when they had made an opening, they let down the bed on which the paralytic lay. And…Jesus saw their faith…” What’s that mean, “Jesus saw their faith?” Well, that he saw them put him through the roof? Yes…why’s that important? Still a hard one I see, let’s move along and come back to it later.” (Hint to the reader: it has to do with Sacraments.)

“OK two friends, go through the roof and put Mr. Laydown in front of Jesus…hey, you’re interrupting my teaching, Jesus is busy! We’re sorry! That’s ok, maybe Jesus can turn this into a teachable moment. Mr. Laydown, what do you want? I want to be healed! Yeah? From what exactly? Well, I’m paralyzed, fix that. Two friends, what do you want? Well, the same thing, fix her, umm, please. Fix him. Ha, yeah, him! Crowd, whatcha want? Heal her, him! Mmm, ok, let’s see what Jesus says: “…they let down the bed on which the paralytic lay. And when Jesus saw their faith, he said to the paralytic, “Son, your sins are forgiven.” Mr. Laydown, is that what you want, forgiven sins? Are you happy now? Well, I guess so…but I’m still paralyzed. Oh. I’m sorry, I must’ve fixed the wrong thing!…

I’m stopping here. This isn’t about the Healing of the Paralytic, but about technique. If you know what you want to teach due to good preparation (which I suppose goes without saying), then by guiding the class through acting, reading, telling, asking and directing, you can fire their imaginations, make their brains work hard, and have them learn stuff they’ll never forget.

Oh yeah…. a picture is worth 1,000 words. Here’s the other picture the title promised: 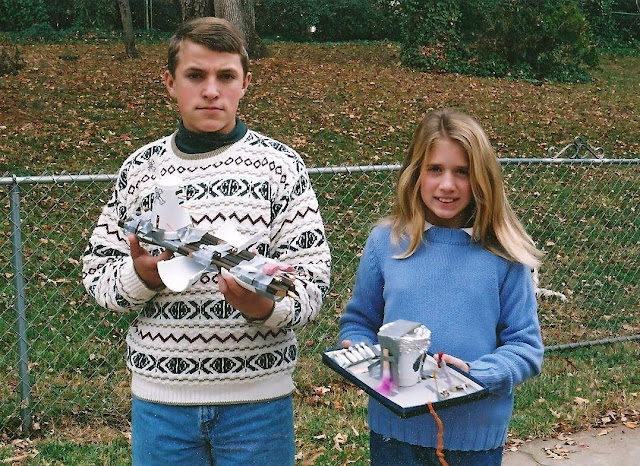 Michael and France are bit older in this pic, but you can tell from their creekboats that God’s imagination & creativity still burst right out of them.