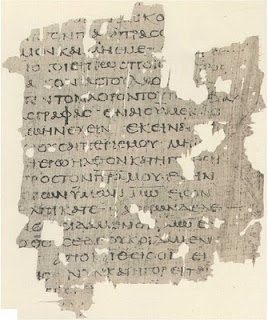 (Can you read this? Me neither.)

I try to use chunks of the Bible to teach the kids their Catholic faith. I don’t like a verse here and a verse there, there’s no context. And besides that, with paragraphs there’s always the opportunity to get in some side lessons, which either build on something they’ve learned, or in passing introduce something I’ll treat in more detail later on.

For example, in our last class of the year we refer to Revelations to better understand the Second Coming. Because of the yearlong emphasis on the unity of bodynsoul, the “Resurrection of the Body,” as the Creed puts it, is important. I could minimally cover it with only this much Scriptural support from chapter 20:

But this translation (RSV-CE, Revised Standard Version Catholic Edition) presents a problem. Because we live in the Bible Belt, I expect at some point in their lives the kids will be asked about faith vs. works, usually like this: “Why do Catholics believe they can earn heaven through good works?” So a constant in class is to show the importance of faith and works. We are a body’n’soul: therefore we have works’n’faith. In adult terms, works are the body’s manifestation of the soul’s faith: they go together. And when works are spoken well of in the Bible, I want to bring it to the kids’ attention. Unfortunately the RSV-CE translates the Greek word ergon, (ἔργον, as in energy) as “what they had done” instead of  “works,” which is more direct, if a bit old-fashioned. The passage should say works so it’ll be clear to 12 year-olds that it relates directly to Faith & Works.

How about the Douay-Rheims, a Catholic English Bible translated a bit earlier than the Protestant King James version (they are very similar):

“And I saw the dead, small and great, stand before God; and the books were opened: and another book was opened, which is the book of life: and the dead were judged out of those things which were written in the books, according to their works. And the sea gave up the dead which were in it; and death and hell delivered up the dead which were in them: and they were judged every man according to their works.” Thank ya, Jesus. With this text we can cover the bodily resurrection, and in passing reinforce the significance of works:

“Y’all see that after Jesus comes back to Earth for the second, and last time, everyone who ever existed gets resurrected, which means their bodies and souls….? get put back together! Yes. Stratopops, how does God do that if your body is all, you know…all decomposed all turned back in to earth? Yeah. Well, I don’t know, but how’d God make Adam in the first place? From dirt! Yep, and remind me, why do we call that first man Adama in Hebrew? ‘Cause it means dirt! Yes, earth. So whatever God did that first time with earth, he’ll probably do it again.

“So everybody is there for the Last Judgment…how will we be judged? Huh? Listen again, “they were judged every man according to their works.” So…how will they be judged? By their ‘works’? Yeah, what that means is we’re judged by what we do. ‘Works’ is an old way of saying what you do. When two grownups meet, usually they ask each other what they “do;” they mean what line of work they’re in. Now, what is every human made of? A bodynsoul! Yes, and which part actually does the ‘works’ that we get judged by? The body! Yes, and if part of the Last Judgment involves what you did with your body, would it make sense to have just souls there? Huh? If a person is going to get judged by his faith and his works, then both his soul and his body should be there. Imagine just my soul is at the Last Judgment, and I’m going to get in trouble because I did bad things while I was alive, but I say, “Oh dear, that sinful old body, it’s all rotten and laying in the ground somewhere, don’t blame me for what that dirty old thing did. My soul never did a single bad thing, I swear!” A whole person is a bodynsoul, so if Jesus is going to judge the whole person….? the whole person needs to be there? Yes, genius!

And class continues per the lesson plan.

And that isn’t the only occasion that the old Douay-Rheims is a useful translation for teaching Catholicism. When we discuss the Church hierarchy, its visible structure, we spend a lot of time on Acts of the Apostles. For example we see how in Acts 1, the Apostles led by Peter decide to replace Judas; that is, they make a new Apostle when they hand down Judas’ apostolic authority to Matthias.

Here are a couple of edited critical verses from the Protestant NIV (New International Version):

“Peter stood up among the believers…and said, “it is written in the book of Psalms, ‘May another take his place of leadership.’ So they proposed two men: Joseph and Matthias. Then they prayed, “Lord, you know everyone’s heart. Show us which of these two you have chosen to take over this apostolic ministry, which Judas left to go where he belongs.”

“Place of leadership?” Too vague, committee-like. No thanks.

The NAB says, “May another take his office.” That’s a translation that works well when we’re looking at the Church’s offices in general: pope, bishop, priest and deacon. It also keeps things clear when we connect it to this verse from Isaiah 22, which Jesus paraphrases when he changes Simon’s name to Peter:

‘I will thrust you from your office. I will summon my servant Eliakim; I will give him your authority. He shall be a father (!) to the inhabitants of Jerusalem. I will place the key of the House of David on his shoulder; when he opens, no one shall shut, when he shuts, no one shall open.’ (edited)

On the other hand, if I’m talking only about bishops it’s better to use the Douay-Rheims version of Acts 1. Instead of saying “May another take his office,” like the NAB, the D-R (Douay-Rheims) says, “and his bishopric let another take.” I tell the kids that ‘bishopric’ is an obsolete word, but ya can’t beat it when you’re discussing where bishops come from. In a typical school year, they’ll hear both versions depending on context. I mention that the Protestant KJV says ‘bishopric’ too, but spells it ‘bishoprick,’ which is more English with the ‘k.’ I do like the ‘k.’

(I swear you can teach Catholicism from the 400-year-old KJV better than you can the latest ‘readable’ Catholic version.)

In class I prefer ‘bishopric’ to ‘office’ because it most directly translates the Greek word episkopi, ἐπισκοπή, episcopacy. During the Church Hierarchy lesson, the kids sort out what peri-scope, micro-scope, tele-scope,  and epi-demic mean, then figure out that an epi-scope, a bishop, is an over-seer. Once they know that, there’s every reason to use a translation that says “bishop” each time that the Greek text says episkopos.

I have the impression that most Bible translations of the last 50 years or so sacrifice what the editors regard as marginal content in order to gain readability, which is fine as far as it goes. I don’t labor over the D-R on a daily basis; I use the NAB or RSV-CE for reading. But anytime I ground Catholic faith in Scripture, I usually check some other versions, (especially the D-R/ KJV) and/or the NT Greek or OT Hebrew. It just takes a couple of minutes and you don’t have to be a scholar, or know any Greek or Hebrew. Even if the NAB translation is best for class, and it often is, I still learn something that may be useful another time.

Online sources for all the Bible versions used:

DouaiRheims This one shows the Greek, English, and Latin Vulgate side by side. Mmmm, Greek….Latin….what could be more exciting? Plus there are some fine articles here on Bible basics, none of which are exhausting, or academic to a fault.