In 6th Grade Wednesday Sunday School ™ any discussion of something in the New Testament is usually connected to an Old Testament counterpart: Loaves & Fishes/ Manna;  Mary/ Eve;  Jesus/ Isaac;  John the Baptist/ Isaiah.   Continuity is important.   So anytime something about the church (that is, the building) comes up, which happens about every 15 minutes when we discuss the Mass, I reference the Heavenly Temple, Solomon’s Temple, or Moses’ Meeting Tent.   For example, our church has two very sober wooden angels flanking the tabernacle.   I tell the kids that they are analogous to the two wooden cherubim and the Ark of the Covenant.   It shows that the Church doesn’t just “invent” things, as some critics would say.

I have drawn some of these parallels between the OT/NT worship structures in class, but only as fragments, such as the aforementioned cherubim/ angels, or the Ark and the Tabernacle.   My lesson plans have doodles in the margins illustrating this or that bit of church, temple, or tent; I’ve never gotten around to doing any comprehensive images until this month.   There’s no opportunity in the current lesson plan for what follows, but next year’s curriculum will be very different; I expect this information to be absorbed into the fabric of those classes.

Here’s the plan of Moses’ Meeting Tent.  Just to remind you, during the Israelites’ 40 years in the desert they lived in tents.  Because God dwelled with his people, he needed a tent, too…a deluxe tent: 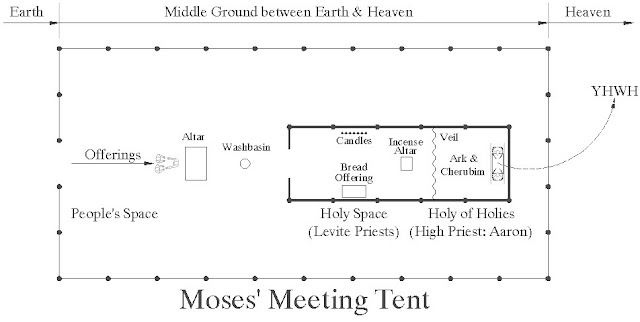 This plan resembles many such plans drawn over the centuries; now they’re a dime a dozen on the Net.  It’s easy to draw from scratch (not that I did) by reading in Exodus 25+ God’s very detailed instructions to Moses as to how to build it.   This doesn’t show everything, nor is it to scale; it’s a liturgical plan. It only shows what matters in class.  The book of Hebrews says the Temple, and by extension the Meeting Tent, is “a copy and shadow of the heavenly sanctuary; for when Moses was about to erect the tent, he was instructed by God, saying, “See that you make everything according to the pattern which was shown you on the mountain.”   These earthly structures model the “sanctuary and the true tent” in heaven.

The “Meeting Tent” has two main parts: the Outer Court, an open space enclosed by a curtain fence, and the Tabernacle (little house/ tent), which itself is divided in two.  The faithful enter the outer gate to bring offerings to the Levite assistants and Aaron’s sons, the priests, who receive them in front of the altar.  There’s a washbasin nearby for a priest to clean his hands before and after he handles each sacrifice. (I haven’t found any specific testimony, but I don’t think the people could go beyond the front of the altar.)

Beyond the washbasin (the formal term is Laver, as in lavatory) is the Meeting Tent proper; God’s Dwelling; the Tabernacle.  Inside the front of the Tent is the Holy Space, containing a lampstand, a table for bread offerings, and a small incense altar.   The incense was so fabulously expensive that it was considered an offering in itself.  Beyond the incense altar is the Veil, a very thick and heavy curtain.  Only Aaron could go past the veil into the Holy of Holies, where God dwelled between the two Cherubim which flanked the Ark.  Before the Ark, Aaron burned incense and sprinkled the blood of a sacrificed bull.

Notice across the the the top of the plan is shown a progression of increasing holiness, and decreasing access: from the earthly, sinful world where everyone lives; to the Outer Court, accessible to the royal priesthood of all believers; to the altar and Holy Space, where the priests work; to the Holy of Holies which is accessed only by Aaron once a year, after much purification; to the Ark, where God dwells.   And the process doesn’t stop at the physical limits of the Tent, it jumps to heaven where the “sanctuary and the true tent” are.

Next comes the Temple in Jerusalem, first built by King Solomon and described in 2 Chronicles 2-5.  It’s a much larger Meeting Tent and Outer Court, built of stone: a permanent Dwelling.   Again, it’s not to scale, and stripped down to liturgical essentials: I don’t show the multiple washbasins, tables, lampstands, etc.   The only notable change is that the Levites, the Priests, and the High Priest are now the descendants of Aaron and the tribe of Levi.

Now here’s a liturgical plan of our parish church:

Proportions have changed, and fixtures have moved over a few thousand years.  It’s still recognizable as a Meeting Tent, but one where the New Covenant’s sacrifice is offered.  Hebrews quotes Psalm 110 in describing the risen Jesus: “Thou art a priest for ever, after the order of Melchizedek,” who offered not animals as a Levite would, but bread & wine.  The faithful enter at the left, and process to the front of the altar and stop where the boundary of a communion rail used to be; the bread & wine is received by the priest and his assistants in the Holy Space.  The priest uses a washbasin to clean his hands before & after the offering; incense is burned; Angels flank the Tabernacle. There’s the same process of increasing holiness and decreasing access.  All very familiar.  But notice that the Holy of Holies isn’t on Earth anymore; Revelations explains, “the temple in heaven was opened, and the ark of his covenant was seen within his temple.”  The High Priest isn’t on earth either; Hebrews explains: “we have a great high priest who has passed through the heavens, Jesus, the Son of God.” Our High Priest is now continually offering the sacrifice directly before God’s throne, “And between the throne and the four living creatures and among the elders, I saw a Lamb standing, as though it had been slain.” Of course we can’t see any of this, because our earthly sight is veiled by sin. But as St. Paul reminds us “now we see in a mirror dimly, but then face to face,” so we have something to look forward to.

This next catechetical year (2010-11) I’ll use a revised curriculum which will go through the Bible chronologically, Genesis to Revelations (not every book).  After that, we’ll tie all we’ve learned into 3 classes on the Mass. I expect to split the above information into chunks digestible by 6th-graders.  Using handouts of the relevant plan, we’ll cover the Meeting Tent in Exodus, and Solomon’s Temple in 2Chronicles. We’ll also discuss the Heavenly Temple in Revelations.  When we cap off the year with the Mass classes, the kids will get the Church plan.  At this point they’ll be prepared to understand not just the liturgy in its historical fullness, but also the building which contains it.