Teaching the tired Wednesday-night crowd can take a lot of energy, a lot of work.  One of my favorite tactics to conserve teaching energy is to use art…oops, I mean Art.  Content-loaded Art carries part of the teaching load for me, I just have to point stuff out and run the discussion.  And the best Art can be used more than once per year, building on prior exposure in earlier lessons, thus making new lessons easier to learn. Plus using the same image to teach different concepts helps the kids integrate the knowledge into the Big Catholic Picture.

Yes, that’s fine as far it goes….but what Art, exactly?  Mmm, let’s look at an example. 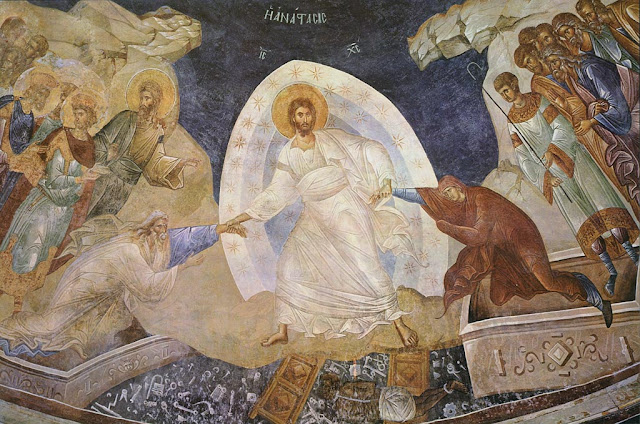 Here’s a fresco of a standard Eastern Christian image known in English as the Harrowing of Hell; in Greek, the Anastasis (ανάστασις), the Resurrection. [Hey, let’s check out the Greek on the fresco: Over Christ’s head is HANAcTACIC,  Anastasis (the odd-looking T is a contraction of a lower case s and and a capital T). To the left is IC, short for IECUC, Jesus; to the right, XC, you guessed it, XRICTOC, Christos. I wonder, considering all the time a fresco or mosaic takes, why save 10 minutes by abbreviating? Am I digressing?]

In the Anastasis we see Jesus, descended into Hell (Sheol). He tramples the gates of ‘Hell,’ and beneath them lie shattered locks and keys. Darkly visible, Death lies bound and conquered, a captive.  Grabbing them firmly by the wrists, a vigorous Jesus forcefully yanks out Adam & Eve.  Adam is the oldest man in the picture, the patriarch.  Following Adam are old King David (now there’s an expert sinner…can you say Uriah and Bathsheba?  The kids know the story), young King Solomon, and John the Baptist (the ‘Forerunner’), whose long hair gives him away.  Sometimes John also wears a rough garment, or carries a scroll indicating his status as Jesus’ herald.  Waiting their turn behind Eve is her son Abel (the ‘Protomartyr’) with his shepherd’s crook, and (I’m guessing) Noah, Abraham, Moses, Elijah, Isaiah and Jeremiah.

The almond-shaped object behind Jesus is a mandorla (Italian for almond), which shows up in all sorts of images of Jesus, from paintings to cathedral entrances.  It predates Christianity, has some pretty complicated meanings.  I tell the 6th graders that in the West it usually symbolizes Mary’s womb and leave it at that.

This Anastasis is in Istanbul, not a common destination; but if you ever visit St. Mark’s in Venice, keep an eye out for the Anastasis there.

So that’s the picture, and here are some occasions that I use it as a teaching tool:

2. To explain what the Nicene Creed means when it says “He descended into Hell.”

3. To explain in the Parable of Lazarus and the Rich Man where Lazarus was as he lay in the Bosom of Abraham.

4. To show that after death, Heaven or Hell have not been the only options. This helps in understanding Purgatory and the concept of Limbo (if it comes up).

8. To comment on the Transfiguration: if heaven wasn’t available yet, where were Moses & Elijah hanging out before their chatfest with Jesus?

The great thing about teaching from a picture like this one is that for any of the above 8 topics, I don’t need any notes…the lesson plan just says ‘Anastasis’ at that point.  I pull out the pic, and it remembers for me.

And it’s a very easy way to review on the fly as well.