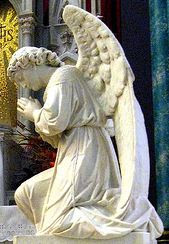 In Wednesday Sunday School we emphasize the importance of being properly disposed at Mass: the fast, no serious sins, reverence. Because we all have bodies and souls, it’s not enough to be spiritually reverent, but physically reverent as well:

“Y’all know that you have to show respect at Mass? Yes, we know. So tell me, then, how do you show respect? Don’t talk. Yes, and? Don’t fool around or daydream. Yes, pay attention and participate. Don’t be like my daughters when they were 14 years old [I portray my daughters: look at fingernails; fiddle with missalette; sigh; look at ceiling; mumble hymn; look at people; fiddle with hair; cough]. Why does it matter what your body is doing? Well, if you act bored you’re probably bored. Yes, if your body is bored or disrespectful, so is your soul.

But you can’t see your own body being slack. Who sees me be inattentive if I’m bored or tired at Mass? God? Well, yes, but who else? Who else? Yes, am I at church by myself? No…oh, other people can see! Yes, and if people are trying to pay God some attention and see me slouched and half-asleep, how does that affect them? It makes it harder for them. Yes, it’s discouraging for them. Suppose the priest sees me paying no attention to his sermon? He’d feel bad. I bet he would. But I will never know in this life who I discouraged by my poor behavior at Mass.

On the other hand if bad behavior can discourage other people, reverent behavior can….? encourage people? Yes, and I know that to be true. When I was your age, 12 or so, this was my parish.  In fact, this was my classroom, but that’s not part of the story. Sometimes we attended an evening Mass. There would usually be only one altarboy, and no music. It was a quiet Mass, and not crowded. I was usually tired and bored, since I didn’t especially pay attention to, or understand, much of what went on. Well on this particular night, there was just the one altarboy, I guess he was about 16. When we began the Creed he was standing still with his hands folded like so [I play the altar server], like all of us; I don’t know why I noticed him. Anyway, you may recall from being at Mass, when we recite the Creed, we bow at this line: “by the power of the Holy Spirit, he was born of the Virgin Mary, and became man.” When we got to that  line, he bowed. And his bow was…perfect [and I bow as I remember him bowing]: not fast, but not too slow; not halfway, but a full bow. Eyes open, but not with a blank stare.

Bowing always seemed a bit weird to me, but he looked completely comfortable, as though bowing reverently was the most natural thing in the world. Time stood still for him and me. It seemed like heaven had come down to Earth for a few seconds. Then the line was done, he gracefully straightened back up, Mass continued.  That altar server showed me by his bow how seriously he took Mass, made me want to take it seriously, too. Most of all, I sensed he bowed for reasons invisible to me, but not to him. And it was the first time I saw holiness, experienced what I call a Holy Bubble.

Soon after, I became an altarboy (and learned a lot of Latin).

Now here I am, 40 years later. I go to Mass and I remember that altar server. I don’t how I would have turned out if I hadn’t witnessed his reverent bow all those years ago. So y’all think about that little thing he did and what a big deal it has been for me. You’ll never know what little thing you do at Mass will have a great impact on someone else, for better or worse.”