We’re in the middle of a month of learning about the Mass.  We just finished this part of the Eucharistic Prayer:

“Look with favor on these offerings and accept them as once you accepted the gifts of your servant Abel, the sacrifice of Abraham, our father in faith, and the bread and wine offered by your priest Melchizedek.”  We review the offerings of these three (a lamb, a ram substituting for Isaac, bread & wine); the kids have seen all of them before.  Now I pull out this bit from the Greenville, SC newspaper: 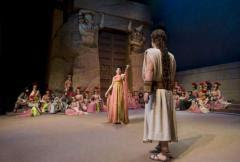 “Hey, y’all look at this, Bob Jones University (the local Fundamentalist college) is staging an opera called Delilah. I mention it because I know y’all love opera as much as I do.  We don’t like opera!  Well, you should like opera.  Anyway, somebody tell me who Delilah was.  She cut off Samson’s hair.  Yes, genius; now somebody else tell me about Samson.  He was strong as long as his hair didn’t get cut.  That’s right.  Look at that long hair, must be a wig.

“Hey, who were Isaac’s parents?  Abraham & Sarah! Right, why were they sad for so long?  ‘Cause they couldn’t have any children.  Yes, and then?  God gave them Isaac.  Right.  Well, Samson’s father Manoah, and his wife had the same problem- no chirrens.  But then one day an angel, which in Greek means….? messenger! yes, a messenger appeared to Manoah’s wife and told her she would soon conceive a son.  Later on, the same messenger (they couldn’t tell he was an angel) also spoke to Manoah, and suggested Manoah should make an offering of Thanksgiving.”

“So Manoah took a young goat with the cereal offering, and offered it upon the rock to the LORD, to him who works wonders.  And when the flame went up toward heaven from the altar, the angel of the LORD ascended in the flame of the altar while Manoah and his wife looked on; and they fell on their faces to the ground.”  (Judges 13) Wow, they didn’t know he was an angel ’til he took off!

“Now, let’s look at the picture on this handout (it has this pic, and the relevant bits from Judges and the Eucharistic Prayer)… 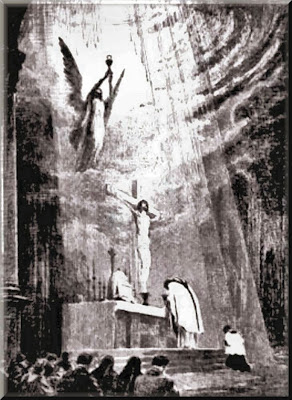 …and read this next part of the Eucharistic Prayer:

“Almighty God, we pray that your angel may take this sacrifice to your altar in heaven.”

“What does that sound like?  It’s like what Samson’s father did!  Yes, it’s like the angel taking Manoah’s offering  from the altar on Earth up to heaven.  But the picture and the prayer are both from….Mass!  Yes!  We don’t see the angel who does this, but it’s part of our prayer, we believe it happens.  Why can’t we see this?  C’mon, we’re blinded by something….oh, sin!  Yes, and to believe in something we can’t see we need….faith.  Yes.  Saints might see something like this, though.  And what is the angel taking up?  Well, the offering.  Yes, but what’s being offered at this point?  Umm, bread and wine? No, there’s no more bread and wine.  Oh, Jesus is the offering!  Yes.  That’s Jesus being carried up; not some goat like Manoah offered but a perfect Lamb.  And we are offering Jesus to whom?  God.  More specifically, please…God the Father.  That’s it.

“What’s everybody doing in the picture?  Huh, they’re at Mass.  No, I mean their posture, they’re all bowing (at least their heads) at this moment, why is that?  No takers…let’s read the last bit about Manoah again:  “…the angel of the LORD ascended in the flame of the altar while Manoah and his wife looked on; and they fell on their faces to the ground.”  Why’d they fall on the ground?  They were scared when the angel took off.  Yes, a bit scared I’m sure, but they were in the presence of a miracle, and it made them feel very humble.  If I had seen that, I’d have fallen on the ground because I had passed out.  People long ago would lie down on the ground in the presence of God, or even a king.  Nowadays we bow, lying on the ground is messy.  But do you ever notice at Mass, the altar boys bow way down, their heads almost touch the ground when they bow.  They bow like Manoah in the presence of God’s miracle.

“Daughter, read the second line, please: “Then, as we receive from this altar the sacred body and blood of your Son, let us be filled with every grace and blessing.”  Yes, let’s review for a second.  At the offertory, what do the people bring up to the priest?  Bread and wine.  Yes, then does the priest offer the bread and wine to God the Father: here’s ten bucks’ worth of bread and wine, Father, please forgive our sins?  Ha, that’s silly!  Yes, so the priest offers what?  Jesus.  That’s right…and who turns the bread & wine into Jesus’ body & blood?  The priest.  Wow, he must have super powers.  Let’s remember, Mass isn’t mostly about what people do, it’s about…..what Jesus does, yes, so who made it happen?  Jesus.  Yes.  But Jesus works through the priest, so that was a good guess.  Then we see in the picture the angel carries our offering from the altar on Earth up to the altar in Heaven…bye!  So how do we “receive from this altar the sacred body and blood of your Son” if it all went to heaven?  Well, some got left behind.  Yeah…think about it this way:

“When my wife puts on Christmas or Thanksgiving dinner, she does a ton of cooking and preparation, and the guests know she worked hard for days. When the guests arrive they usually have something with them, what would that be?  A present?  What kind of present do you bring to a dinner, a power tool?  Ha, no, food!  Good guess, and maybe for the adults something…wet? Umm,…wine?  Yes indeed.  Why do guests bring presents?  ’cause they are glad you invited them!  You got that right!  They are not just saying ‘thank you’ but showing it by bring a thanksgiving offering.  How do the Greeks say ‘thank you’ at their festival?  Efharisto!  That’s right…Eucharist.  Now if someone brings my wife a nice bottle of wine, does she say thanks, and put it away for another occasion?  No, I bet you drink it right then!  Right!  She says thank you so much, let’s open it now….here’s a glass for you, let’s all have some.  It’s like Mass: she does most of the work; the guests show their thanks by offering a small gift; she is gracious and offers them back some of their offering.  God does the same thing: we offer Jesus; God says thank you; y’all have some too.  And when we “receive from this altar the sacred body and blood” do we put it in our pocket for later?  No, we eat it right then!  That’s right!  That’s how we show thanks at a feast: we eat it all right then!”

That finishes our coverage of this part of the Eucharistic Prayer.  By the way, this does not exhaust the teachable content of that picture; for example, I did not mention the crucified Christ…that’s not a mere crucifix in the picture.