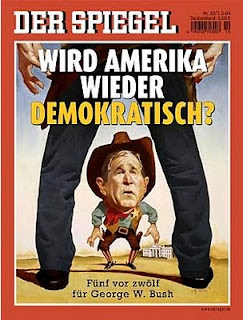 Kids get textbook fatigue…I get textbook fatigue, too. Information presented in a textbook lacks the authenticity of the same information found elsewhere. If something is in a textbook it’s because the people who write textbooks think it matters, which is fine with me, but it’s not an especially compelling endorsement for 6th-graders. Even something as simple as a map of France has more credibility and impact when it’s in a travel magazine or a book about wine & cheese instead of a geography textbook. It’s why German in Der Spiegel has more vitality than German in the speech lab. In school, knowledge is managed & packaged for the kiddies- they’re aware of that by 6th grade; but out in the world- it’s raw and real!

That’s one reason I prefer for the kids to read the textbook at home, and then in class learn the material from other sources, usually the Bible or the Catechism. They are good sources, but they’re both On the Reservation, so to speak. For kids they’re just one step removed from the textbook.

So it’s always a pleasure to find a secular discussion of a moral/ religious/ Catholic topic that not only shows the relevance of what we do in class, but can be a source for actually learning the material. I prefer newspapers or serious periodicals, because the children know that unlike their textbooks, newspapers aren’t kidstuff. Newspapers, those symbols of maturity, set the standard for grownup, adult reading. I can’t say for younger kids, but 6th graders are definitely interested in the maturing process, and in being treated as more than mere “children.” So they know that when I use the paper in class I have respect for them.

Recently we covered the 8th Commandment, Thou shalt not bear false witness against thy neighbor, which in 6th grade means don’t lie. But the textbook wisely expands the commandment beyond mere lying into sins such as slander, detraction, and gossip. By coincidence, this article about gossip appeared in the Wall Street Journal on the same day as our class.

That evening, when we got to the topic of gossip, I displayed the paper and said we’d learn about gossip from today’s news.  The article’s opening sentence was a perfect attention-getter: “Wendy Fandl sees a lot of children growing up without a lot of guidance. They say harsh and hurtful things about each other, and the words come too easily. Encouraged by the snarkiness in pop culture today, they seem more sarcastic than past generations.”

From there we went on to discuss gossip. I’d read/ paraphrase the following excerpts, and the kids would make comments and observations.

“…before they say something to or about someone else, they should ask themselves: “Is it kind? Is it true? Is it necessary?”

“It’s emotionally lethal. It’s leading to suicides……If you stop gossip in your own life and bring it to the attention of your community, then people will follow your leadership.”

“It’s always around fifth grade when students start calling each other names….”

Young people especially are at greater risk today of being damaged by gossip, given the growth of Web sites where students leave cruel, anonymous postings about their peers.

Years ago, people who were picked on or gossiped about in high school could graduate, move away and start fresh. “These days, the gossip follows them. It’s online forever….”

The article closed with a great little story, which ends:

“Treat everyone the way your mother would want everyone to treat you.”

And after we were done with the article, I closed our discussion of gossip by telling this ancient fable (from this scene in the movie “Doubt’ ):

“A woman was gossiping with a friend about a man she hardly knew – I know none of you have ever done this – that night she had a dream. A great hand appeared over her and pointed down at her. She was immediately seized with an overwhelming sense of guilt. The next day she went to confession. She got the old parish priest, Father O’Rourke, and she told him the whole thing.

‘Is gossiping a sin?’ she asked the old man. ‘Was that the hand of God Almighty pointing a finger at me? Should I be asking your absolution? Father, tell me, have I done something wrong?’

‘Yes!’ Father O’Rourke answered her. ‘Yes, you ignorant, badly broughtup female! You have borne false witness against your neighbor, you have played fast and loose with his reputation, and you should be heartily ashamed!’

So the woman said she was sorry and asked for forgiveness.

‘Not so fast!’ says O’Rourke. ‘I want you to go home, take a pillow up on your roof, cut it open with a knife, and return here to me!’

So the woman went home, took a pillow off her bed, a knife from the drawer, went up the fire escape to the roof, and stabbed the pillow. Then she went back to the old parish priest as instructed.

‘Did you gut the pillow with the knife?’ he says.

‘And what was the result?’

‘Now I want you to go back and gather up every last feather that flew out on the wind!’

And the article is now in my lesson plan for next year.