One of my enduring images of Jesus is in a stained-glass window in St. Francis de Sales Church (now a co-cathedral) in Houma, Louisiana.  Jesus, during his 40 days in the desert, vigorously rebukes Satan, who gestures dramatically toward all the earthly goodies he tempts Jesus with.  Before I mastered the written word, I learned this, and many other stories, through my ears and eyes.  More than learned it…it’s imprinted.

I’m not an iconographer in any formal sense, but I like to draw as part of catechism class. Do I draw well? I do not. But guess what…it doesn’t matter. As the Chicagoan Martin Luther might say, draw boldly, badly, and often in your class, it makes learning easier. Let’s look at the whiteboard from my last class to see what I mean, and how even bad drawings help the kids learn.

The Mass draws from earlier ideas & events that have been the main subjects for the last two periods, including the Last Supper, the Passover, Memorial, Sacrifice, Substitution. We’ll spend about 7 classes on the Mass; these first two lessons should provide the students with a basic framework on which they can hang more knowledge later. Let me digress a bit: I don’t believe anything should be learned in isolation; the teacher should relate all new knowledge to what the children already know. Even something as self-contained as memorizing the Hail Mary should include learning about the Annuciation and the Visitation, maybe a little John da Baptis’, some Sarah’n’Isaac, right? Enough digressing already, on to the whiteboard: 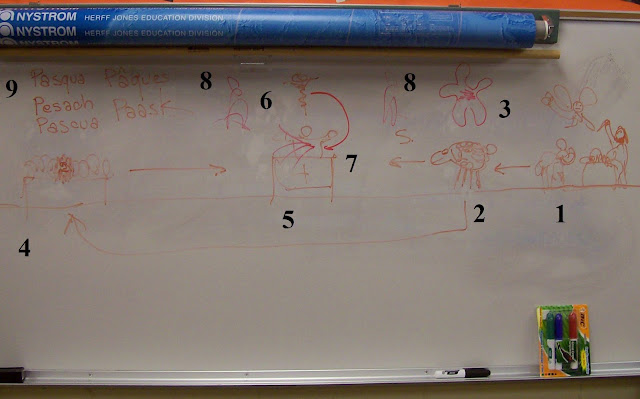 I have numbered the images 1 through 9 in the order that I drew them, which reflects the flow of the class. (If you can’t see all the items 1-9, right-click the image and open it in another window.) Notice that the sketches aren’t drawn in order, but in a way that puts #5 in the middle of the board. I planned that ahead of time with my, you know, lesson plan. I don’t usually have quite this sweep of illustration, but it’s a rare class that I don’t draw something.

OK then, here’s a synopsis focusing on the drawings, more than the actual lesson itself. I’m stripping out most of the speaking and reading that goes with the pictures.

1.  God doesn’t require the sacrifice of Abraham’s son, but does require a substitute sacrifice, the ram.

“Hey ya’ll, what’s this class about? Well c’mon, for the love of God, did anyone read the chapter? I did! Yeah, did you retain any information? What’s it about? The Mass. Yes, particularly the sacrifice part of the Mass. Let’s see…..if we’re gonna talk about sacrifice, we gotta talk about Abraham ‘n’ Sarah…they were sad…why was that? Cause they didn’t have any children! Yes, and remind me please, what does love want to do? Create! Yes, and married people’s love wants to create…? Children! Yes. So they were sad but then what happened? God gave them Isaac! And Isaac is Hebrew for…? Laughing! Yes, why? Because they were so happy to have a baby. Yes, happy, happy!” (Note: this is all review for the kids, they learned it during the Marriage and Sex class. Review is constant because old information supports the new.)

“But then God told Abraham what? He had to sacrifice Isaac. Yeeess…(I start to draw Abraham) here’s Abraham…what’s this? The knife. Yep, and this is…Isaac (badly drawn, but we all know who it is). Yes, and what’s this he’s on? An altar. Yes.” You can see where this is heading without hearing the whole discussion, and can see the fairy-winged angel that was added as part of the process. Also notice the really bad ram. I had a tough time with the curved horns. When a picture is coming out extra bad like the ram, I joke about it and the kids will make fun, too. I’ll say “Hey now, do you know how much I get paid to do this? Nothing. So don’t complain about my drawings!”

2.  The Passover Lamb, like Abraham’s ram, is a substitutionary sacrifice in lieu of a household’s firstborn. Plus the Lamb has to be eaten as well as killed, for the ‘passing over’ to work. Sometimes I’ll take a red marker and cut the lamb’s throat as a prelude to the bloody doorpost, but didn’t this time.

We review what they already know about the Passover, as we did with Abraham and Isaac.

3.  This is a standard drawing in our class of a Body and Soul. It’s always badly drawn because the kids recognize it as fast as I draw it. It’s an inside joke. It depicts a person as a unique creation comprising a unity of Body and a Soul (as opposed to being, say, a soul stuck in a body). Because of this unity, there’s often a physical component to spiritual things. In the case of Passover, for the Angel of Death to pass over, physical actions had to be performed: get a lamb, kill it, and splatter the blood on the door. The Hebrews then had to eat the lamb, make it a part of themselves, just as we still do at Communion. The Bodynsoul Pic shows up every time we discuss a Sacrament, since they all involve the physical and the spiritual. I’ll refer to it more than once in this class period.

4.  This is of course the Last Supper. I draw it to the far right to leave room in the middle for the Mass. The arrow from the Passover Lamb to the Last Supper reminds us that it was the Passover meal for Jesus and the Apostles. I’ll usually read or tell a bit from Luke 22: 7-15 to emphasize the Passover-ness of the Last Supper. “Let’s see, who’s this in the middle? Jesus. And these other monkeys? The apostles! So how many people are there? 12!….No, 13! Ha! Trick question, ya gotta pay attention!”

5.  “Here’s the sacrifice part of the Mass. We see the priest offer the sacrifice just as Jesus did at the Last Supper. The arrow from the Lamb reminds us there’s a sacrifice presented at Mass, so what’s that thing the priest stands at? An altar? Yes, and the arrow from the Last Supper means that Mass is also a…meal? Yes, so what else is that thing the priest stands at? Umm, a table? Yes. Y’all tell me please, where was the Lamb at the Last Supper? It’s Jesus. Yes, did he offer himself?  Umm, yes? Yes he did: remember He said, “this is my body which will be given up for you”….then did he sacrifice himself? Huh? No! So when did he get sacrificed? Oh, when he was crucified!”  Yes, so now I draw…

6. …the Crucified Christ above the altar just like at Mass. As with the Passover Lamb, I will sometimes add blood to this sketch with a red marker. “Who killed Jesus? Roman soldiers. What did Jesus say about them? Well? C’mon, “Father forgive them…they don’t know what they’re doing!  Yes, they sacrificed the Lamb, Jesus, and had no idea. And how many times was Jesus crucified? Once? Of course once. But even though Jesus was sacrificed only once, He is offered all the time at every Mass. By the way, the priest is standing in for someone at our memorial Last Supper, who’s that? Judas? Ha, no, Jesus!” Yes, the priest stands in for Jesus, and Jesus works through the priest, as we see by this….

7. …….red line from the crucifix which radiates out from the priest. “Y’all know when y’all are paying attention and learning and being good honorary sons and daughters, I see God’s goodness bursting out of you. That’s sort of like how Jesus works through the priest at Mass to make that bread and wine miracle happen….boom! bursts right out!

When you’re at Mass and you get bored, recall Abraham, Isaac and the ram; the Passover Lamb; the Last Supper, and Jesus the new Lamb, who was sacrificed on Calvary; and how Mass pulls all these things together for us. That’s it for tonight. Oh my, we still have a few minutes of classtime, so tell me: why do we have these two statues at the front of the church?” I draw….

8. ….these two red blobs. “Well, who are they? Tarzan and Jane? Ha! That’s silly, it’s Mary and Joseph! Yes. They remind us that at Mass, they and all the saints are there with us. If you get bored, look around you and imagine all of them there at Mass with us. I bet they are glad to see you.”

9.  “Since we still have some time, the Hebrew word for Passover is Pesach. Quien aqui habla Español? Yes, how do you say Easter in Spanish? Pascua. Yes, Pascua comes from the Hebrew word Pesach. In Italian they say Pasqua; in French Pâques; in Denmark or in Iceland or somewhere like that it’s Paask. Many languages say something about Passover when they say ‘Easter.’ We miss out on that in English; but we do call Jesus the Paschal Lamb, which means what? The Passover Lamb? Yes! Look, we ran 30 seconds over! See you next week…for the love of God, read chapter 19!”

And in all its ineptitude, isn’t that big picture a great learning opportunity?