I am a big believer in occupying the hands of little ones as we instruct them.  They enjoy doing things themselves and having a finished product to show parents and this way when asked “what did you do today?” they can show something.  Of course, the hope is that parents look at it and then discuss it too! 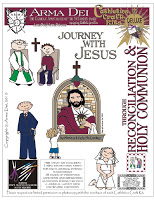 Monica McConkey of Arma Dei: Equipping Catholic Families  emailed me a kit that I choose for review, the “Journey with Jesus” scrapbook which includes the seven sacraments; explanations of sin, the domestic Church, and the Mas as well as definitions from the catechism and prayers. She breaks down the topics very well, asking questions with space for answers and helps lead the children to understanding by making the faith personal and relevant to their lives.  The line drawings were done by Monica’s daughter, are well done and appealing.  Plus, they are big enough to color if you want.

The logistics of the kit are fairly simple.  You order on line at the Arma Dei website and the have the PDF download immediately.  Be sure to print on only one side your paper. (my advice, so you can learn from my mistakes)  Other supplies needed are scissors and glue, crayons if you’ll be coloring the pictures.  If you want to make a cover, you’ll need card stock or construction paper.  Instructions are included to make an accordion fold book or you can cut each page, glue it onto construction paper and make a larger book.

What I like about the craft is the flexibility, both of the content and finished product.  Depending on your needs, each sacrament could be made separately, the prayer pages to make a prayer book, the Mass pages to make a Mass book or whatever suits you best.  If I were to do it with a class, I’d probably make a scrapbook with construction paper, rather than an accordion book.

I am passing this on to the second grade catechist and will have the other catechists take a look on the website and see what they would like for their classes this year.  I think this is an excellent product, practical yet engaging and most of all, very accurate in presenting the truths of our faith.

There are many other kits, games and resources on the website, both free and for a fee.    Monica is also about to release a new series on Super Saints.  Here is a video to learn more.  You are sure to find something you can use for you family or class.

I was recently contacted by Dan Gonzalez and asked to check out his new iPad app, Mass Explained.  As someone who loves both the Church and technology, I was so happy he did!

I have gone through a dozen or more “apps” in the last couple of years which focus on Catholicism. As of today, I may only use three or four of them.  As for the others, I got rid of them because I found the application either lacked intuitiveness or the depth of material was just not sufficient.

It is critical, from a technology standpoint, for an application to have a good “flow;” it must make sense when the user is interacting with it.  If a user has to “hunt and peck” to find what they are looking for, then they’ll quickly become frustrated or lose interest.  With the number of apps available today, a user will not waste time navigating a cumbersome product; they will just simply delete it and move on to the next one.

As someone who has spent over two decades studying the Catholic faith, I have found “apps” lack the level of detail and scholarship I would like to see in a product.  I have concluded most Catholic applications built for smartphones and/or tablets are for people only seeking information at the introductory level.

Mass Explained for iPad hits a home run both in its easy functionality and for its scholarship! I can’t think of any other Catholic app which allows you to zoom in and out of pictures, spin 3-D objects, and view 360 degree panoramic images?

Mass Explained allows the user to use buttons, drop down menus, or swiping gestures to navigate through the material.  That type of flexibility, allowing the user to customize their experience, is a great feature!  The use of pop up windows also allows the user to stay a page while “drilling down” to the information they want.

From a scholarship perspective, Mass Explained, succeeds where others have failed!  Hundreds of quotations and references to scripture, the Early Church Fathers, the Catechism, church councils, papal encyclicals and more!  Mass Explained even has audio files, allowing users to hear prayers in Hebrew, Greek, Latin and English.  This is great application for people looking to go beyond a basic understanding of the Mass.  I could easily see RCIA catechists using Mass Explained to introduce the Mass to prospective Catholics.

Congratulations to Dan on creating a beautiful, easy to use and informative product for Catholics and non-Catholics alike!  I heartily recommend adding Mass Explained to your list of Catholic iPad Applications!

This is a slightly modified version of a post under the same title which appeared on Christopher’s Apologies on 17 Feb 2014.