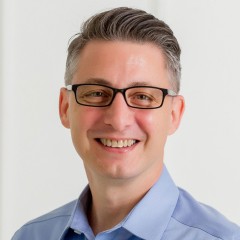 I am the Director of Religious Education at Exaltation of the Holy Cross Church in Champaign, IL, a medium-sized Catholic parish of roughly 1,000 families in Central Illinois. I also work for the Diocese of Peoria providing leadership, communication and guidance to parish religious education programs in my vicariate. Additionally, I do catechist training on the diocesan level and present at the St. John Bosco catechetical conference held at Franciscan University of Steubenville in their catechist training track.

In a former life, I was a Navy pilot but gave that up for a less thrilling but infinitely more satisfying career working for the Church. Most of my hands-on work is with RCIA where I develop curriculums, teach and lead teams in the initiation process.

I have an M.A. in Theology and Christian Ministry with a Specialization in Catechetics from Franciscan University of Steubenville. I grew up Catholic but drifted away after my Confirmation. After 20 years away from practicing Catholicism, I came back to the Catholic Church in 1997 with an insatiable desire to learn as much as I could about Catholicism and to work for the conversion of others to this deep, rich and life-giving Faith. A major part of my reversion back to the Church came from watching and listening to Scott Hahn on audio and video tapes. So, in 1998 I left the Navy to study with Dr. Hahn at Franciscan University with a vague notion of somehow making a living with this degree. I was blessed to take almost every class Dr. Hahn offered. I gained immeasurable knowledge from him and the wonderful faculty at Franciscan.

I immensely enjoyed learning theology but my overwhelming passion was to see people converted to the Catholic Faith. After a few years of theology classes, I was pretty sure I could make this work. So, I volunteered to teach CCD at a local parish. I quickly found out that a depth of theological knowledge does not necessarily make you a great catechist. In fact, it hurts you a lot! I realized that I didn’t know what I was doing and needed to find out how. That’s when I entered into the Catechetics program at Franciscan and met my other great influence, Professor Barbara Morgan. Barbara taught me the art and science of teaching the Faith and how to deliver my teaching so that it would facilitate conversion. This was what I’d been looking for and I soaked up as much as I could.

In 2002, I graduated from Franciscan University and began my job at Holy Cross. It is my greatest joy to work in the RCIA process and see people light up with the fire of the Holy Spirit when they grasp the truth of the Catholic Faith. I’m always working to learn more about evangelization and catechesis. I’m continually tweaking my methods and studying to find what works for bringing people into the fullness of the Catholic Church.

Read all columns by Marc Cardaronella