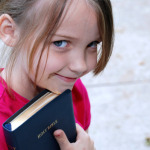 “The consolation was for us, not just for the children,” says Corinne Addiss, a remarkable catechist from New York, recalling a day last summer when she and her Vacation Bible School team received a beautiful sign of God’s presence working powerfully through the children.

“We were in the second day of our program. Almost a hundred children nursery school age through sixth grade children enrolled, with another thirty-something junior counselors, grades seven and above. My energy was uncharacteristically low. I wanted to just get through the week. This day’s focus was the Eucharist, and one of our ‘stations’ was Adoration.

“As a teacher was finishing up with a group of about twenty little ones, they all came out of the pews and she showed them how to genuflect properly in front of the Blessed Sacrament–on both knees. As she watched, one child suddenly went down on her belly, prostrated in adoration before the monstrance. And then, one after another, the children followed until all of the children were lying with their hands extended in front of them, adoring Jesus — in a position no one in the program had taught them.”

The teacher, Corinne remembers, knelt in silence, tears streaming down her face as she gazed in awe at the sight. “There was no ‘earthly’ explanation; it was something within the children. It was their faith in God.”

It would seem the program received special graces that day. She says, “There are always graces. But that day, there were graces being accepted.”

Corinne has created many programs in her diocese over the years and has a reputation for doing creative, effective work.

“We are in competition with the world which attracts minds and souls through the senses,” she explains. “We try to appeal to the senses of sight and sound as well. Jesus used visuals – coins, mustard seeds, mountains, boats, etc. We decorate everything in an imaginative and cost-effective way using rolls of plastic table covering, brown paper bags, things from home, paint and lots of creativity! A visual teacher can produce great fruits by helping children ‘see’ and learn the truths of faith. It’s about busting the myth that faith is no fun. When great stuff is taught in fun, interesting ways, it bears fruit.”

“Most often I am flooded with ideas when I’m sitting in church in front of the Blessed Sacrament,” she says definitively. “If I try to force them, it’s useless. I’ll go to Adoration and sit with my list of projects and say, ‘Okay, God, I need your help,’ and I just start jotting down ideas. Once I’ve got an outline for the VBS, I talk it out with others and together we finalize the plan.”

Here are some of the activities that prepared the children to appreciate the Real Presence of Christ in the Holy Eucharist:

“All we want is to do is His will,” Corinne says, in conclusion. “And I know from experience not to expect consolations. ‘Your reward will be great in Heaven.’ But for those, young and old ‘who have eyes to see and ears to hear’ the consolations in this program are many…as are the graces which give us the energy to continue – next time!”

So again I ask, does God give you his Spirit and work miracles among you by the works of the law,
or by your believing what you heard? (Galatians 3:5)