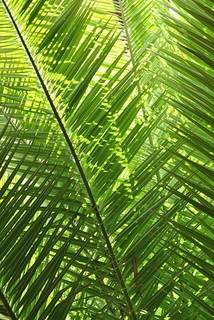 No, it’s not because the gospel is so long.

But it is because of the gospel.

You know how there’s all the different parts for the gospel reading on Palm Sunday?

There’s a narrator and the bystanders, the priest is Jesus, and then there’s the part for the congregation.

I hate saying, “Crucify him!” I don’t much like the “Hail, King of the Jews” part either.

I’m never quite sure–should I say it with conviction and really play the part? Or, is that bad. Maybe I should downplay the whole thing and say it sort of…monotone.

In giving me that part, it seems like the Church is implying that somehow I had something to do with this. That makes me uncomfortable.

I mean, I’m innocent in this right? Right???

The other thing about Palm Sunday is it seems to have a bit of an identity crisis. Is it Palm Sunday or Passion Sunday?

Are we happy about Jesus’ triumphal entry into Jerusalem? Or, are we sad that he’s put to death?

The mashup of these two themes seems kind of contradictory.

But this one I get.

The long road from Sunday to Friday

On Sunday Jesus enters the city with shouts of joy. Everyone is in the streets proclaiming him king!

“Hosanna!” they yell. That’s the traditional greeting for a Davidic King returning triumphant from battle. In those days, a thousand years before Jesus, the people would line the streets waving palm branches as the warrior king passed by shouting, “Hosanna!” or “Savior!”

The chief priests and scribes knew exactly what the people were saying. They’re proclaiming Jesus the new Davidic King, the Messiah! That’s why they tell Jesus to make the people stop!

But Jesus comes back saying there’s no stopping this. “I tell you, if these were silent, the very stones would cry out,” he replies.

That’s just crazy, right? You’d never do that would you?

You are the man!

How many times do we profess belief on Sunday and then betray that belief throughout the week? We’re unkind, selfish, and resentful. We lie, gossip, judge, and manipulate.

Maybe there’s even bigger sins like the use of contraceptives in your marriage.

We are those people! Who killed Jesus? It was every one of us!

It’s unfortunately fitting that I wave my palm at the beginning of Mass and then shout, “Crucify him,” later when I read the gospel.

It’s my sin that put him on the cross. It’s my betrayal of him in a thousand little ways that made it necessary for him be there.

So I challenge you to say those verses every year and let yourself be uncomfortable.

If you don’t know your weakness, then let this gospel reading be the reminder to you. You are not alright. You’re broken inside, and you need what happened on that day.

And yes, you’re partly to blame. Own it! Because if you don’t, then you also can’t receive the gift that comes from it.

If we all recognized in humility our discomfort in the Palm/Passion Sunday gospels and open ourselves to it, we’d all move light years forward in understanding we’re not innocent, we’re not self-sufficient, and we’re not in control.

We need the guilt in order to claim the prize–new life in the one who truly saves us from ourselves.

This post originally appeared on Marc’s blog Evangelizing Catechesis. You can visit Marc there for more articles on catechesis, evangelization, and spirituality.