Tanja Cilia’s image-laden post on the Annuciation got me thinking about my favorite Annunciation (ok, one of my favorites), the one that’s part of the Isenheim Altarpiece by Mattias Grünewald: 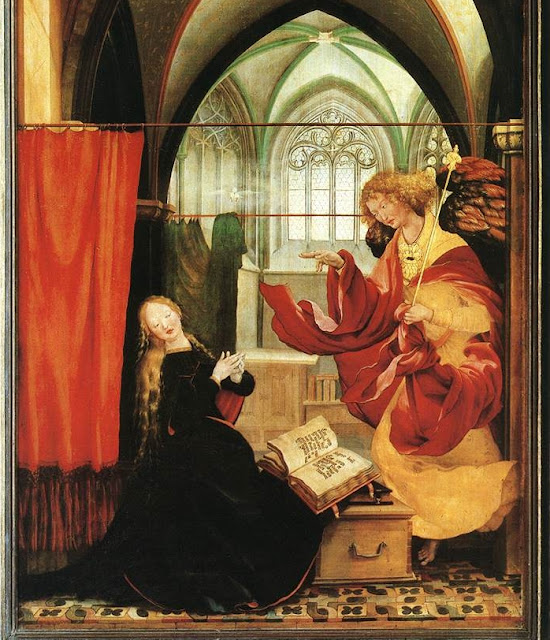 I couldn’t remember the artist; I get Annunciations confused all the time. Fortunately, My Wife the Art History Professor could listen to my vague description and say, “No, that’s not Van Eyck. I think you want the left-hand panel of the second configuration of Grünewald’s Isenheim Altarpiece.” Umm…yes! “I’ll send you a link to a good jpeg.” OK, thanks! (Thank ya Jesus for my wife.)

I have to digress already. Recently in class we were discussing Gabriel’s visit to Zechariah, and learned that the Greek word angel/ ἄγγελος simply means messenger, as does the Hebrew word malak/ מלאך (whence the name Malachi). For example in Numbers, when “Moses sent messengers from Kadesh unto the king of Edom,” the messengers are malachim. To distinguish a winged messenger from the run-of-the-mill sort, the Hebrew Old Testament will say messenger of the LORD, יהוה מלאך, malak YHWH, as in “the angel of the LORD called unto Abraham”; or messenger of God, מלאך אלהים, malak Elohim, as in “the angel of God called to Hagar.” In the Greek New Testament (and Greek Septuagint O.T.) we read ἄγγελος κύριος, aggelos kyrios, angel of the Lord (you know, kyrios as in Kyrie eleison).

The kids must understand that angel just means messenger. Then when we get to words such as evangelist and evangelium, they’ll know that angels don’t have anything to do with those words.

To further digress, when LORD is all caps it refers to YHWH. By using LORD in English we avoid pronouncing or writing God’s name.

So we were sorting out messenger/ angel, and one of the kids says, “What about Mercury? I dunno- what about him? Well, he’s a messenger. Yeah, a mythological messenger, so? He has wings, too. Yeah he does… I bet he was called an angel too! Was that your point? Yes. Genius at work, yes, he’s a winged messenger, an angel like Gabriel. Except that Mercury…isn’t…real! Yes.”

In Tanja’s article she points out that as in Grünewald’s painting, Gabriel may carry a staff to indicate he’s a messenger. Like so: 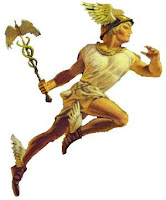 Above the green curtain temple veil hovers an ethereal dove, ready to overshadow the New Ark with God’s creative energy. Yes, what? That looks like a church not a temple. Well, were there any churches when Mary was a young woman? No. OK then. The curtains temple veils themselves are pulled back to reveal what Ark? The Ark of the New Covenant? Yes, who is...Mary! Yes. And do y’all see the Old Covenant Ark? Is it that box? Yes, I think so. Now tell me about Mary’s book. It’s the Bible. Yes…or at least the Old Testament, which would reasonably rest on the…Old Ark? Yes. When Mary was alive was there a New Testament? No! Why not? All the stuff hadn’t happened yet! Yes! Y’all are so smart.

Annunciations often show Mary reading Isaiah 7:14, the very prophecy she’s about to fulfill. But none of these symbols is the one that makes Grünewald’s Annunciation a favorite. It’s the one in the upper left hand corner…up there…oops, I accidentally cropped it off from that top image. Here you go: 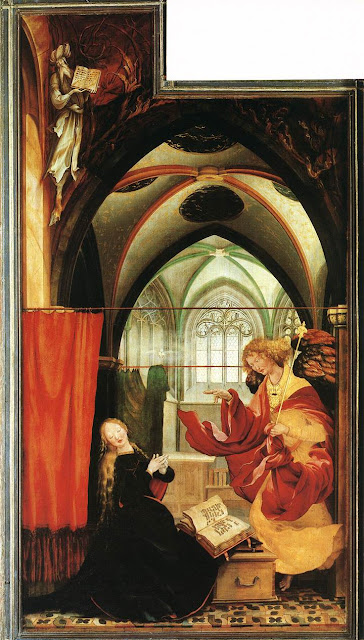 “Who is that old fork-bearded turban’d guy with another book? A book painted in….Hebrew. Why is he hovering up there in the corner? No guesses? Whose prophecy was Mary reading? Umm…Isaiah’s? So? That’s Isaiah? Yes, that’s Isaiah, and he’s reading in his own Old Testament the same 7:14 passage as Mary, but in Hebrew. Isaiah can’t read Latin like Mary can…or something. Apparently God’s let him out of Sheol long enough to see his prophecy be fulfilled.”

Kids love to learn by figuring out pictures like this one. In this case, through our discussions of the Old Testament they already know bits about the temple, the veil, the Ark, Hebrew, Greek, Latin, Isaiah, and his prophecies. Prior to this year, they learned the Annuciation story, Gabriel, the Hail Mary, etc. Those accumulations allow them to analyze an Annunciation pretty much on their own with minimal guidance on my part.