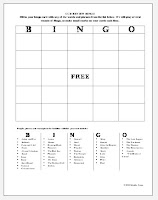 Well, I’ve been feeling a bit discouraged, because after various interruptions and special programs, I think I’ve had seven class sessions with my students for a Scripture course that’s supposed to be 14 weeks long. So it’s been a frenetic pace all the way through and I haven’t done as thorough a job as I would have liked to, but – it is what it is. Tonight was our last class, since the next two weeks will be replaced by Mass for the Feast of the Immaculate Conception and then our closing Advent Program. I needed to give them a “final exam” of sorts and I knew they weren’t ready. Enter…BINGO.

Love me some review-game bingo. It’s not the most thrilling activity in the world, but it’s better than a review sheet and more interactive. Best of all, it requires minimal effort, because you have the kids make their own cards.

Here’s a blank review sheet Bingo card. The way it works is – pick 8-10 terms for each column of the Bingo chart. You can put these on a separate review sheet (and use the Bingo as a complement) or stick the list right below the card itself, as I did in this Scripture class review Bingo. (WARNING: Looking at this example will show you what a shoddy job I did of covering the Old Testament. I mean, not a prophet to be found on the list. I did the best I could).

Anyway – then you tell the kids to pick words from each column and write them wherever they’d like on the corresponding column of the Bingo card. You’re Catholic, right? I don’t need to explain how Bingo works. I usually read aloud the “answers,” Jeopardy-style, to see if they can guess what I’m talking about, and then I go over it once more with them. You can even just make up a list on the spot and write it on the board – as long as you have at least five terms for each column (four for the “I” column, technically), they can make up a card. Much, much easier than trying to generate your own set up randomly-sorted bingo cards.

Hope your class is making the transition to Advent nicely. (Code for: not totally losing it as Christmas break approaches).

Dorian Speed has been a classroom educator and catechist for several years. She has worked in classical Catholic education as well as traditional school settings, and writes about culture and faith at Scrutinies.